It didn’t take long for Hana Kerner to become enamored with the idea of committing to Virginia. 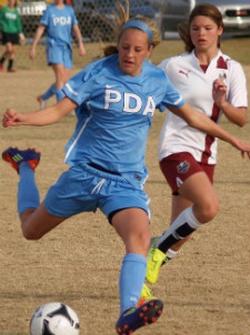 “UVA was one of my first visits and I fell in love with it,” she told TopDrawerSoccer.com. “I loved everything about it from the coaching staff, to the girls on the team, to their tradition of excellence, to the history of the school. UVA has a community that I know I will be proud to be a part of. I wanted to make sure that I went through the recruiting process carefully and considered all my options, but I always came back to UVA.  It's a great fit for me with the perfect balance of academics and soccer.”

The program is obviously of high prominence, attracting top recruits and capturing last fall’s ACC tournament championship. But it wasn’t just the stature that drew Kerner to the Charlottesville school.

“It's so exciting to have a chance to play for coach [Steve] Swanson, coach [Ron] Raab and coach [Kerry] Dziczkaniec,” she explained. “The coaches, and the girls I met, were incredibly welcoming from the first moment I visited. I'm confident that with my hard work, the program will help me develop into the best player I can be and I'm very excited about being able to help the team continue its success. I love the team's style of play and having an opportunity to play in the ACC, against some of my current teammates, and the best competition in the country, is going to be amazing.”

There was plenty to like about the university off the field as well.

“I was impressed with the way the school really supports the student-athletes,” she said. “UVA has so much to offer academically and I met so many great people on my visits. The school also has first class facilities for the athletes. It was amazing to learn about the history of the school and I can't wait to attend the University that Thomas Jefferson founded. And, of course, Charlottesville could not be more beautiful.”

For Brooke Carty, she found everything she was looking for in a college at East Carolina.

“The facilities are awesome, coach Rob [Donnenwirth] is from New Jersey and made it feel not so far away from home,” Carty told TopDrawerSoccer.com. “Nothing can beat the Pirate Pride surrounding the whole area. And my favorite part was the soccer field, it is everything an athlete wants.”

Carty also liked the program’s upcoming move to the American Athletic Conference, as she hopes to become a better player going up against the high competition level.

“I believe that I can be a contributor on the field as they move on to a new conference,” she said.

When it came to making a commitment to Valparaiso, Lily  Chetosky’s decision-making process featured a quick turnaround.

“I went to Valpo for the first time with my mom on a Friday and committed that Monday,” she told TopDrawerSoccer.com. “It was all so quick! I didn't think I would fall in love with the school that much! I decided to commit to Valpo because I had this feeling that it was the school for me. I could easily see myself there for four years.”

The versatile midfielder who can also feature as an outside back, Chetosky liked head coach John Marovich’s ability to get the most out of his players.

Outside of the soccer program, she found herself drawn to the campus as well.

“I did fall in love with the school,” she said. “I liked how it was super pretty and green and open. It is a smaller school, but because the campus is so big, it made the school feel big.”

Defender Allie Moroney (Dallas Texans) committed to Central Arkansas for the class of 2014.

Forward Mary Beth Gorham (Javanon) committed to Bellarmine for the class of 2013.

Forward Samantha DePinho (Match Fit Academy) committed to American for the class of 2014.

Midfielder Olivia Knox (Real Colorado) committed to Tennessee for the class of 2014.

Midfielder Katie Murray (Kings Hammer Academy) committed to Illinois for the class of 2015.

Midfielder Summer Halle (Pride SC) committed to Wyoming for the class of 2014.