Some players want to use college as a chance to leave home and see a new part of the country. But others jump at the chance not to stray too far from family. 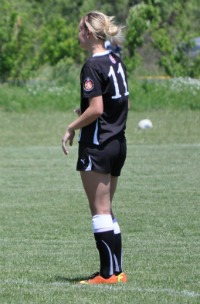 That’s what helped Hailey Melton make her decision to commit to Tulsa.

“Being from Tulsa I love the thought of staying close to home,” she told TopDrawerSoccer.com. “My family is very close. Every Sunday we get together with my grandparents and have lunch after church together. I don't want to ever give that up.

“With the University of Tulsa being a small school it has that home like feeling to it with such a great education also. Once meeting with the coaches I knew this was where I wanted to be.”

It’s not just about being close to family, of course, as Melton knows that this opportunity will help her improve as a player.

“Coach Kyle and coach Rhein both made me feel very welcomed from the beginning and they both seem to have such a great relationship with their players,” she said. “Since coach Kyle has taken over the soccer program at Tulsa they have done nothing but improve each year. They also have amazing facilities for the soccer program there.”

Attacking players are always in high demand in the recruiting chase, and Oregon picked up a potential weapon for its class of 2015 with the commitment of Fawcett.

“I visited a number of different schools during the process and after going to Oregon, I just knew that was where I wanted to be,” she told TopDrawerSoccer.com. “The new coaching staff there is amazing. Coach [Kat] Mertz has a proven track record and has a lot of enthusiasm for what the Oregon program is going to become. The facilities at Oregon are some of the best that I have seen and the support for the student athletes is also amazing.”

The optimism that accompanies a new coaching staff was definitely palpable and made an impression on Fawcett as she surveyed her potential college options.

“There is a lot of energy and excitement about the program with the new coaching staff and they have a great vision for where they feel they can take the team,” she said. “The entire coaching staff is great and I really connected with them and their style of play. I'm excited to help them build a championship team and be a part of that process.”

While other players look to stay home, Sumer Rahe preferred to head out of the state of California. It was a path that eventually led her to make a commitment to Kansas.

“After meeting the coaching staff and seeing the athletic facility I knew KU is where I wanted to go,” Rahe told TopDrawerSoccer.com. “I really liked the campus and what they offer and loved the closeness that I felt hanging with the team. It's a family atmosphere much like we have at Surf. The style of play is similar to what I'm used to and with Coach [Mark] Francis and assistant coaches Kelly [Miller] and Jessica [Smith] I know it's a place that I can grow and help me become a better player.”

Kansas also fit the criteria that Rahe searched for inside the classroom.

“Academically KU has exactly what I was looking for,” she said. “They have a great support structure for student athletes and couple that with great training facilities, a really beautiful campus, and the town support of Lawerence. I couldn't ask for anything else.”

Midfielder Hannah Watts (FC Delco) committed to Louisiana Tech for the class of 2013.

Goalkeeper Elaine Burdett (Heat FC) committed to Arizona for the class of 2015.

Defender Nicole Dupin (Houston Express SC) committed to Louisiana-Monroe for the class of 2014.