Girls Commitments: Figuring it out It never comes as much of a shock to see another top recruit commit to Notre Dame, so it came as little surprise to see midfielder Cassie Phillips, No. 25 in the IMG Academy 150 for the class of 2015, commit to the South Bend powerhouse. 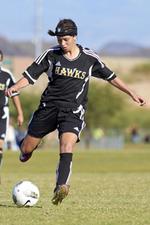 “I chose Notre Dame because you can't go wrong with their great soccer program and academics,” she told TopDrawerSoccer.com. “The coaches are outstanding and I felt comfortable with Coach [Randy] Waldrum and his staff.”

Phillips seemed extremely aware of the tradition of excellence that goes before her, and it was something that attracted her to the school as well as challenges her down the road.

“They have a lot of great players coming in before me, and I wanted to play for a team that was going to be in that competitive environment and push me to become a better soccer player,” she said. “I also feel that Notre Dame has a great support system that is going to do whatever it takes to help me succeed in life and become a better person.  It is a very traditional school with a unique historic background, which I thought would be neat to be a part of.”

Proximity to her native Michigan didn’t hurt in the decision-making process, either.

“Notre Dame is only two and a half hours away from where I live, so it's close enough to where I can be away from home, but come back to visit whenever I need,” she said.

Standout defender Annie Monaghan is bringing a bit of a different background to her future playing destination in Vermont.

Along with the typical background of excelling for both Matchfit Chelsea and Montclair High School in her native New Jersey, Monaghan represented the Republic of Ireland at the U17 level.

She’s looking forward to see how all that helps her at the next level.

“My soccer experience and a winning tradition at every level will help me at UVM,” Monaghan told TopDrawerSoccer.com.

To go with her background, Monaghan is pushed to the limit by her highly regarded teammates at the back, including Julia Ashley (North Carolina(w) commitment), Alana Cook (Stanford(w)) and Casey Garfinkel.

A lot of her decision to commit to Vermont boiled down to her high regard of the coaching staff, to go with some familiar faces already on the team.

"[I] love Vermont head coach Kristi Lefebvre and assistant coach Jason Russell who are building something special with Catamount Soccer,” Monaghan said. “[I] want to be a part of that and want to help them build winning program that competes against best teams in country and makes the NCAA [tournament] . . . defender Zoe Boyd and midfielder Kerry Glynn are from my club soccer program. We also played internationally with Ireland and they made my Vermont decision easier.”

Defender Cami Pham (Dallas Sting) committed to Northwestern for the class of 2013.

Forward Alexis Warner (Michigan Hawks) committed to Michigan State for the class of 2015.