At the start of her college search, Kendall Higgs was leaning towards staying in Florida. 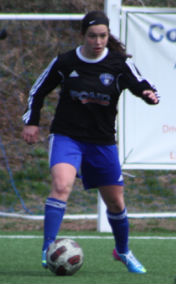 Once she started communicating with Pittsburgh, however, she soon realized that the ACC program had everything she was looking for in both school and soccer.

“I decided to commit to Pitt because of the great relationship I have with the coaches and because the school held the challenges I want on and off the field,” Higgs told TopDrawerSoccer.com “It was the perfect fit for me as a player as well as a student. I respect the coaches greatly and love that they have something new to teach me every time we converse.  I felt an instant connection to coach Miller, coach Baker and coach Moschos that has only become stronger as I have gotten to know them over the last year.”

While last place finishers in the ACC a year ago, Higgs is confident that things are looking up for the team.

“I love the idea of helping to build a program,” she said. “Being that they are fairly new to the ACC, I am so excited to watch and contribute to them making their way to the top of one of the best women’s soccer conferences. Lastly I like the expectations that [the coaches] have for us on and off the field. In either place, they want us working hard and doing the absolute best we can.”

A beautiful campus sealed the deal, along with academic opportunities that interested her.

“The history the school holds is something I find truly fascinating,” Higgs said. “Other than the scenery I also loved the fact that Pitt was one of the only schools that had the exact major I want to pursue, Bioinformatics. It is one of the top medical research schools in the country, so I know with hard work I am guaranteed a great education.”

A fearless target forward who looks forward to the physical battles with opposing defenders, the decision to commit to Dartmouth was a straightforward one to make for Sally Sandoval.

“Dartmouth has the perfect balance of what I am looking for on the field and in the classroom,” she told TopDrawerSoccer.com. “Both academically and athletically, Dartmouth’s programs are some of the top in the country, and will definitely do a great job challenging me.”

Things look a bit different at the New Hampshire soccer program, as Ron Rainey took charge of the program when Theresa Romagnolo left for the Notre Dame post.

“From the facilities to the coaching staff, Dartmouth’s soccer program felt like the perfect fit,” she said. “The level of play at Dartmouth is exactly the environment I see myself in, also head coach Ron Rainey has been fantastic throughout this whole process.”

The academic schedule – a bit different than most other universities around the nation – was another element that drew her interest.

“Dartmouth’s quarter system was more than appealing, and the campus itself is beautiful, Hanover is a great town and I’m so excited to be involved in that kind of community,” she said.

Midfielder Mariah Williams (Syracuse Development Academy) committed to Albany for the class of 2015.

Midfielder Clare Mengel (Connecticut FC) committed to Lafayette for the class of 2017.

Forward Beth Kamphaus (FC Stars of Massachusetts) committed to Dayton for the class of 2015.

Forward Kelly Maday (FC United Select) committed to Illinois for the class of 2016.

Goalkeeper Danielle Kaufman (FC United Select) committed to Maryland for the class of 2016.