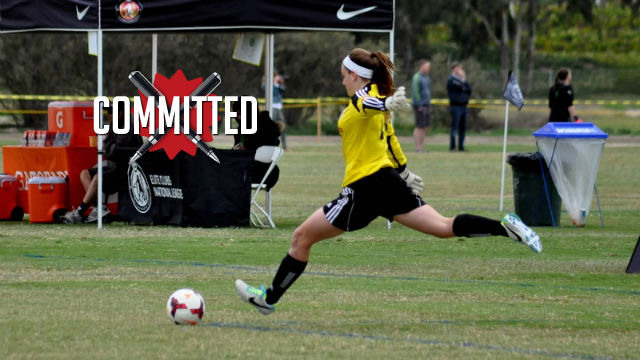 Goalkeepers are usually cut from a different breed, and Olivia Ausmus feels like she has the right mindset to excel in the position.

Ausmus, a standout for Challenge SC who describes herself as “vocal and an intense keeper,” found the right college fit without leaving Texas. 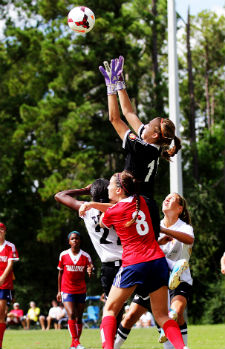 “I decided to commit to Texas A&M because I fell in love with every aspect of the school,” she told TopDrawerSoccer.com. “The team is really one big family (really all of Aggieland is a big family) and I believe that Texas A&M is going to give me the best opportunity to succeed and continue to develop as a player, but most of all I couldn't see myself being anywhere else.”

A program that has fared extremely well under head coach G Guerrieri, Ausmus liked that she’ll eventually join a program that is contending on an annual basis.

“I like that they are continuously a threat late in the season, competing for a national title,” she said. “I loved how welcoming everyone was when I went on my unofficial visit there. I really like that head coach G Guerrieri is also the Goalkeeper coach, that is really unique.”

With plenty of time spent at overnight soccer camp and a relationship her Challenge SC club side and the Aggies, Ausmus was extremely familiar with the soccer program, another aspect that made it a straightforward decision.

“When I was younger I went to the overnight camp three years in a row, I watched the players wanting to grow up and be just like them,” she said. “I'm excited to have the possibility of having that same effect on kids in the future.”

A dedicated player on her ECNL side, Melanie Stiles simply thought that Clemson offered everything she needed from both a school and a soccer team.

“I decided to commit to Clemson because of the outstanding soccer program, coaching staff, academics, and incredible school spirit,” she told TopDrawerSoccer.com. “It has always been a goal of mine to play Division 1 soccer at an ACC school, and I am proud to say that I now have the chance to do that thanks to the amazing staff at Clemson. In addition, I love the south and I was eager to attend a large, well-known school, such as Clemson.”

Head coach Eddie Radwanski has done a great job putting together strong recruiting classes the past few seasons, and the staff certainly had a great deal of appeal to Stiles.

“My absolute favorite part of the soccer program would have to be the coaching staff,” she said. “They are truly there to make sure that you succeed in everything you do, and I am never going to take that for granted. Both coach Eddie and coach Siri [Mullinix] have really made my commitment to the school a great process, and I look forward to being coached by the for my four years of college.”

The team chemistry she saw from the current crop of players was another definite plus.

“I loved the current players on Clemson's soccer team, who were all so welcoming and are like sisters to each other,” Stiles said. “I also love the athletic facilities, the apartment-style dorms, and that the entire town of Clemson bleeds orange and purple to support Clemson athletics.”

Midfielder Holly Rothering (Crossfire Premier) committed to Washington State for the class of 2016.

Midfielder Meghan Tveit (Crossfire Premier) committed to Harvard for the class of 2016.

Defender Laura Suero (FC Bucks) committed to Penn State(w) for the class of 2016.

Midfielder Becca Spitalniak (Westside United) committed to IUPUI for the class of 2015.

Midfielder Taylor Hubbard (Tampa Ba United) committed to Alabama for the class of 2016.

Forward Rachel Kingston (FC Stars of Massachusetts) committed to Boston University for the class of 2016.

Defender Tatumn Milazzo (Eclipse Select) committed to South Carolina for the class of 2016.