Serious injuries can derail the most promising of youth soccer careers. But when Bree Livingston tore her ACL, she knew that it wasn’t going to stop her from achieving her dreams and continuing to play the game at the next level.

The PDA forward, who is a hard worker and an extremely fierce competitor, completed her comeback and verbally committed to VCU. 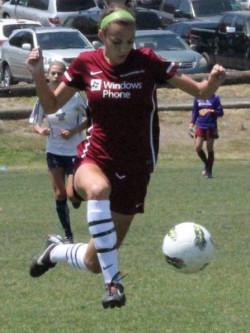 “I decided to commit to VCU because after my visit, I definitely knew that it was the place for me,” Livingston told TopDrawerSocccer.com. “VCU has a very challenging curriculum and had the competitive major I was looking for. Also, the team was very welcoming towards me and I really enjoyed the coaching staff when I met them.”

The Rams recently completed their first season under new head coach Lindsey Vanderspiegel, who took over earlier in 2013. Livingston liked the team environment fostered under the coach.

“The team was close on and off the field and very talented and hardworking players,” she said. “I also really enjoyed Coach Lindsey. Her coaching style is one that I knew I would love to be coached with. Coach Lindsey took the time to know me as individual and got to know my family, which is something, I really appreciated.”

A versatile player usually found along the Slammers back line, Bryana Wiehe found the fight fit to continue playing at Nevada.

Along with hitting it off with the current players and head coach Melissa Price and the rest of her staff, there was a positive vibe about the team.

“I liked how welcoming and genuine the soccer program is,” Wiehe said. “Their motto is to make their players a better person.”

Wiehe, who attributed her ability to get this far to her club coaches at Slammers FC in California, looks eager to live in another part of the country.

“I liked the dorms, campus and being able to experience all four seasons,” she said.

Midfielder Lynsee Voss (Real So Cal) committed to San Diego for the class of 2016.

Forward Amanda Carlough (D’Feeters) committed to University of Mary Hardin-Baylor for the class of 2014.

Defender Kristy Cotter (PDA) committed to Columbia for the class of 2015.

Midfielder Ashlyn Kearney (Penn Fusion) committed to High Point for the class of 2016.

Midfielder Jennifer Byers (TSC Hurricane) committed to Texas A&M for the class of 2016.

Midfielder Taylor Ziemer (Santa Rosa United) committed to Virginia for the class of 2016.