A player that likes to lean on her speed off the field, Ashlyne McComb offers an attacking option from the back. She found that Samford was the right fit for her both on and off the field. 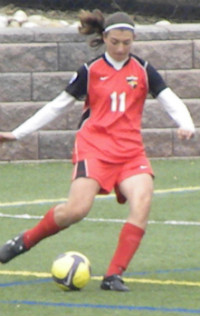 “During my unofficial visit, I could not find a single negative thing about the school or soccer program,” she told TopDrawerSoccer.com. “The coaching staff and the players were exactly what I was looking for. The school offers the majors I am considering and I liked the small class sizes.

“I also liked the faculty’s philosophy and their desire to see the students succeed academically as well as being a well rounded individual. Based on the average attendance at home soccer games, I could also tell that the soccer program has great support from the students and community.

An instant connection with the coaching staff was also a major plus.

“The most important thing I liked about the soccer program was Coach Yelton and his staff,” she said. “They are really encouraging and have very high standards for their players both on and off the field. Coach Yelton really took the time to get to know me as a person and it was obvious from his interactions with the team that the players really respect him and he really cares about his players. I also was able to spend time with the players and they were so warm and welcoming.  The whole soccer program feels like one big family.”

Her options in the classroom also prodded her in this direction.

“Since I am currently undecided about my major, I liked that the school had all of the majors I am considering,” she said. “Besides having great academics and a strong soccer program, the campus is beautiful and I really liked the size of the campus and the surrounding area. There was a real sense of community on campus and the faculty I was able to meet was caring and seemed to be great mentors. I really liked the atmosphere of Samford and everything it stands for.”

A prolific goal scorer at the high school level – Madison Bower finished her career with 153 goals and 94 assists for her varsity squad at Millville High School – the striker found the right place to continue her collegiate career.

“I committed to La Salle because I love the coaches and level of play,” she told TopDrawerSoccer.com. “The Atlantic 10 will allow my family to attend most of my games.”

The New Jersey native who lives just two and a half hours from home, La Salle was one of her top choices from the start.

“This was the only place I really considered I had my first visit loved the coaches, the campus, the city and never visited anywhere else,” she said.

Forward Morgan Goff (CASL) committed to North Carolina for the class of 2016.