A forward who understands what she need to do both offensively and defensively, Felicia Davidson is a Jamaican U17 youth international who won’t stray too far from her Florida home for her future college soccer team. 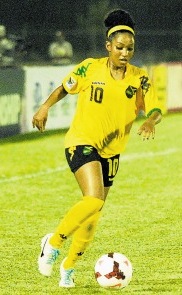 “I decided to commit to FIU because I really like the campus and it's not too far from home,” Davidson told TopDrawerSoccer.com. “It is a very good university with many educational programs to choose from. The coaches made me felt that committing to FIU would be an easy transition from my current soccer club, Boca United.”

Davidson, who competed at the 2013 U17 CONCACAF tournament with Jamaica – the country of her parents’ birth – faced a steep challenge when she had the chance to suit up in the international game.

“My international experience in Jamaica on and off the field was tough for the first couple of days because I needed to adjust to the new playing environment and new teammates,” she said. “Eventually, once I made the adjustment it was fun and competitive. When I scored against Mexico in the 2013 CONCACAF U17 tournament I couldn't explain how happy I was because Jamaica had made it into the knockout stage for the first time.”

She liked Florida International’s multitude of options it offers its student athletes and is eager to face the next challenge of Division I soccer.

Setting foot on the LIU Brooklyn(w) campus helped Madison Shockley make her mind up: this was the right place for her.

“I was looking for a small school that fit my academic needs with a strong Division I women's soccer program,” she told TopDrawerSoccer.com. “What I loved most about LIU is how unique the campus is. I currently attend a performing arts high school and its very unique, not nearly your average high school. When I walked around LIU Brooklyn it reminded me of my high school and I could immediately see myself thriving in that environment.”

The women’s soccer program is under new leadership this fall, as Tim Robbins took the reigns of the team after Tracey Bartholomew departed to take the job at Columbia.

Shockley said that Robbins was another big part of her decision to commit to the NEC power.

“I also really loved the new coach for LIU, coach Robbins,” she said. “Before meeting coach Robbins I knew his resume was practically impeccable. When I visited campus he was very down to earth and welcoming but serious when it came to the women's soccer program and that's a huge factor for me. I noticed that coach Robbins and the rest of the LIU women's soccer coaching staff have a firm balance on the college experience along with a hardworking dedicated team atmosphere and I think that is extremely important. I know I will grow leaps and bounds as a player and a person under coach Robbins's instruction.”

The Delaware native also liked the school’s physical therapy program, her planned major once she starts school in the fall of 2015.

Midfielder Krista Hinchman (FC Europa) committed to Loyola (MD) for the class of 2015.

Midfielder Riley Wilde (Scorpions SC) committed to Canisius for the class of 2015.

Defender Emilia Bladin (Eastside FC) committed to Harvard for the class of 2014.