A visit to the campus of Tennessee helped seal the deal when it came time for Madeline Gangi to make her college commitment. 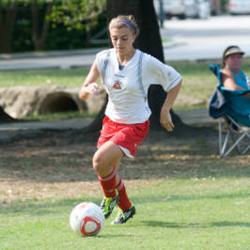 “Tennessee has a great atmosphere,” she wrote TopDrawerSoccer.com in an email. “The school and campus are beautiful. The coaches are awesome, down to earth and really want their players to grow and succeed. The team is close and all the girls were very nice. The team seems to have a close relationship.”

A hardworking, fast-paced, and technical player, Gangi is an outside back with plenty of ability going forward.

Along with enjoying her time on campus, the vibe that the current group gave off was just what she was looking for when it comes to the team dynamic.

It was early on in the recruiting process that Marist caught the eye of Amanda Garcia, and after doing her research, decided this would be the place for her to be.

“I chose Marist because it fits me both academically and athletically allowing me to fulfill my dreams of being a D1 soccer player,” she wrote TopDrawerSoccer.com in an email. “I particularly love the campus and after going for an unofficial visit, I knew it would be the right setting for me. After attending some of the camps, I feel a strong connection between the team and there is a great communication level between the coach and the players.”

There’s plenty that she’s looking forward to upon arrival, but standing out to her the most is the chance to play right from the start.

“The most exciting aspect, in my opinion, of going to play at Marist is the opportunity to continue to have the mindset of always working hard and fighting for a spot or some time to play,” she said. “Marist offers a fair opportunity for freshmen to play so I will constantly be driven to work and improve on my skills.”

An athletic and technically gifted midfielder, Madison Turner was another recruit who came away from a campus stopped impressed with what she saw.

It was one of the many factors that influenced her decision to recently commit to Maryland.

“When I visited Maryland I really liked campus,” she wrote TopDrawerSoccer.com in an email. “I could see myself going to school there and for the first time it made me really excited about going to college. I really liked Coach [Jonathan] Morgan too. Also I have a lot of family on the east coast so it is exciting to me that they will be able to see me play.”

The lure of ACC soccer was hard to resist, and while she knows that it isn’t going to be an easy road, Turner has been a long admirer of the conference’s high level.

“I've always wanted to play for a team in the ACC and growing up it was my favorite conference,” she said. “I always liked watching the ACC teams play because I like the athletic style and think it’s a good fit for my style and also very fun to watch. It’s really exciting for me to know that I’ll be playing with the team in the ACC in only two years.”