A technical player who can play either up front or in an attacking midfield role, it didn’t take long for Kentucky to win Rebecca Callison over, convincing her to make a verbal commitment to the program. 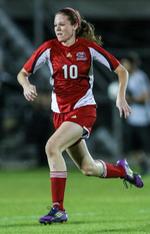 “I started my college search early and was able to visit many colleges to get a feel for what I wanted,” she told TopDrawerSoccer.com. “Kentucky was one of the schools that had an interest in me and I had been in contact with them by phone several times and really enjoyed the conversations. They were on my list of visits and when I arrived on the campus for my first unofficial visit, I absolutely fell in love with the place. I didn’t want to even take any more college visits because I knew I had found the school for me and I already knew that I wanted to play soccer there. It was a very easy decision for me to make my verbal commitment to Kentucky even though it has come earlier than I ever expected.”

A good rapport with current head coach Jon Lipsitz and the rest of his coaching staff was a major factor as well, as that helped Callison know that this would be the right place for her.

“There were several things I was looking for in the college program I wanted to be a part of,” she said. “The first thing was a coaching staff that has the same personality as mine. The coaches at Kentucky are unbelievable and were so easy to talk to and I felt like I was already part of the family there after visiting. While they make you work very hard everyday in practice they also are loose and laugh a lot at other times.

“Another big thing that I was looking for was a school where my skills would fit in. I love the formation they play and can see myself playing in a couple of different positions for them. Finally, I was looking for a program that was still building. Coach Lipsitz and his staff have done an incredible job in getting the Kentucky program to where it is right now in just 4 years. The are continuing to get better each season and I want to be a major part of helping them to achieve their goals.”

Playing under her future head coach in ODP was a significant factor in Patyon Atkins’ decision to commit to play under Jon Lipsitz again starting in the fall of 2015.

“I committed to the University of Kentucky for many reasons,” Atkins said. “First, I really like the coaches, Jon & Michelle, and had the opportunity to play for Coach Lipsitz through my experience with ODP this past year. I respected his style of coaching and learned a lot from him in a short period of time. I am also confident that Coach Lipsitz and Coach Rayner are committed to building a top, nationally ranked team at UK.”

A player who has picked up a number of accolades in her native Kentucky, and taken a trip to Costa Rica, giving her exposure to what it’s like playing overseas, the off the field benefits also drew her to stay in state.

“I also chose the University of Kentucky because I want to study Physical Therapy, and it has one of the best programs in the country,” she said.

It’s never a surprise to see a player jump at the chance to challenge them in the ACC, and that was one of many things that drew Alana Hockenhull to make her commitment to Clemson.

“I chose Clemson because I really loved the campus on my visit,” she told TopDrawerSoccer.com. “The coaches and players were very friendly and of course, they play in the ACC.”

Hockenhull also explained how the style of play reminded her of what she’s been taught at the club level, most recently playing for Orlando City, a new entrant in the ECNL this past year.

The school itself seemed to also hold an allure for her and seemed like a better fit than some of her other options.

“Clemson’s campus is really beautiful,” she said. “I had visited a lot of schools that were located in cities, but decided I was more comfortable in a smaller town setting. I knew I wanted the big school experience, so Clemson was able to fill both of my needs.”

Defender Isabel Damiani (So Cal Blues) committed to California for the class of 2014.

Forward Taylor Sarver (Rockford Raptors) committed to Northern Illinois for the class of 2015.

Defender Gabrielle Mclaurin (FCX) committed to Eastern Illinois for the class of 2014.

Midfielder Montana Sutton (PDA) committed to Virginia for the class of 2015.

Midfielder Jordan DiBiasi (Colorado Rush) committed to Stanford for the class of 2015.

Forward Ren Waters (Tophat SC) committed to UNC Wilmington for the class of 2014.

Defender Savannah Andrews (FC Richmond) committed to UNC Wilmington for the class of 2014.

Midfielder Tanner Haughn (Pride SC) committed to Texas Tech for the class of 2015.

Defender Madison Wiegand-Brown (Pride SC) committed to Oregon for the class of 2014.