Like many other college recruits, Malley O’Brien and her family had to make sacrifices in order for her to attract the attention of college coaches. To get herself to that level, O’Brien made a two and a half hour commute from her Superior, Wisc. home to the Minneapolis area to compete with the Minnesota Thunder Academy.

Eventually, that led to conversations with Wisconsin head coach Paula Wilkins and O’Brien’s eventual commitment to the program.

“I think I have always wanted to be a Badger,” O’Brien told TopDrawerSoccer.com. “I am the first girl soccer player from Superior to ever commit to a D1 college. Everyone seems to think it is pretty cool that I am going to Wisconsin.” 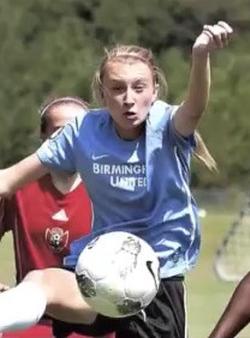 A midfielder who takes pride in her technical ability and hard work, the opportunity to play for Wisconsin came about this year.

“This summer at the Badger camp, Paula Wilkins told me she was interested in me playing for UW,” O’Brien said. “So that is when I really thought about the campus, the education and the city and knew that I have not been any place more perfect for me. I had met Paula Wilkins a couple times at some camps and practices and really liked how she ran things.  After speaking with her at an unofficial visit and discussing where she saw me fitting in and where she feels the program is heading I was 100 percent sure that I was ready to be a Badger. I am really very excited about my future there.”

A player who recently moved from forward to a center back role, Katherine Taylor only needed a visit to Arkansas’ campus to convince her to make a commitment to the program.

“I decided to commit to Arkansas after I saw the campus and felt the family feel it offered,” Taylor told TopDrawerSoccer.com. “I also loved the coaches. They give me a very homey/family feel and I felt more than welcomed. I also loved the girls. I didn't find a single negative thing about it.”

The Razorbacks, who are currently off to a 6-0-0 start to the 2013 season, have steadily improved under second-year head coach Colby Hale. That’s upward trend enticed Taylor.

“The soccer program at Arkansas is growing,” she said. “With the new coaching staff, I can tell that they're going to do something amazing with the program and the talent they have."

Goalkeeper Rebecca Ravitz (PDA) committed to Davidson for the class of 2014.

Forward Hanna Armendariz (Slammers FC) committed to Portland for the class of 2015.

Goalkeeper Jessica Long (Seacoast United) committed to Stony Brook for the class of 2014.

Forward Emily Mouille (Rush Wisconsin) committed to Marquette for the class of 2014.

Goalkeeper Nathalie Nidetch (Albertson SC) committed to Northeastern for the class of 2015.