In this week’s commitment updates, a top ranked defender chats about joining Notre Dame, a goalkeeper discusses committing to Pittsburgh, a star from Texas heads to LSU, and a California girl stays local.

Many things spurred Genevieve McGowan’s college search – trying to find a winner being perhaps highest on the list, and ultimately helping her choose the Fighting Irish.

“When I started looking at schools, I was really looking for a high caliber soccer program with great academics,” she wrote TopDrawerSoccer.com. “I visited ACC programs and was really impressed with the coaches, teams, and universities. But I want to work towars a national championship, and I believe that with two championships in the last 8 years, Notre Dame is the right fit that will allow me to achieve that goal with the team.”

A tenacious center back who prides herself on her organization and communication abilities along the back line, McGowan is very excited to learn and hone her game under Notre Dame’s coaching staff.

“I'm excited to play for Coach [Randy] Waldrum because he's a legendary coach, I like his style of play, and he stresses that his players show good character on and off the field,” she said. “When I visited, the players on the team were very friendly and really made me feel at home.” 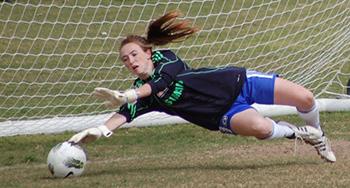 Taylor Francis’ college commitment boiled down to the school she visited last.

After a number of stops, she found what she was looking for when she stopped by Pittsburgh.

“The last school I visited was Pittsburgh and from the moment I met the coach and was on campus I just absolutely fell in love,” she wrote TopDrawerSoccer.com in an email. “The atmosphere, architecture, and landscape of the school are just so unique and awesome in a really cool way.  The coaching staff is amazing.  I am joining a program where I have the potential to be an impact figure and really make a difference.”

An extremely motivated and competitive shot-stopper, Francis searches for ways to make herself better, stronger and faster each and every day.

Another motivating factor is Pitt’s planned move to the ACC for 2014, which happens to fall in the Francis’ second year at school.

The prospect of challenging herself at a higher level and hopefully making a difference are just a couple of things she is looking forward to about heading to Pitt.

“When I think about playing in college I'm most excited about getting the chance to be part of a team that has the potential to make a big impact and the possibility that I could be a large factor in the success of the team,” she said.

LSU was in Alexis Urch’s mind since birth.

“I have always thought about going to LSU because I was born there and have family that lives there, so I have always thought of myself as an LSU Tiger,” Urch told TopDrawerSoccer.com over email. “After visiting a few schools my sophomore and freshman year, I knew LSU was the best fit for me because it met all of my expectations: a D-1 school with a strong athletic program.”

The allure of her former home made Urch, a top ranked defender from the 2014 class, pick the Tigers over a handful of other schools that she had considered.

“Other schools I considered were: Santa Clara, Baylor, Texas A&M, Oklahoma, and Rice.”

Haley Lukas is very excited about her future school.

“UC Berkeley is a fantastic university not only from an athletic standpoint, but an academic one as well,” Lukas told TopDrawerSoccer.com over email. “I was looking for a top university that gave me lots of academic options but also a soccer team that competed at the highest level, and with Cal I get the best of both worlds.”

Her passion for the Golden Bears stems from a football game she attended a few years ago.

“Well I first fell in love with California when I went to a Cal football game a couple years ago and absolutely loved the spirit of the school,” Lukas said. “From there it was about what UC Berkeley had to offer as a school and the connection I made with the coaches. The campus is amazing and the vibe of Berkeley totally fits me.”

The defender had other schools in consideration before making her decision, including Stanford(W), Santa Clara, USC, and UCSB(w), but her fit with Cal and the coaching staff really sealed the deal.

“I have a great connection with the coaches,” Lukas added. “I really feel they get me as a player and that I will learn so much from Coach [Neil] McGuire and his staff. They're not only great soccer coaches, but also lots of fun to be around! In addition I really like the chemistry of the team and how hard they work.”