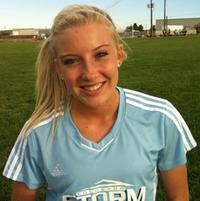 Sometimes, location is everything when it comes down to make a college commitment – and that just so happens to be the case for Alexandra Vidger.

“It was my dream school because I live in Colorado and Boulder is an awesome city,” she said of her college decision. “I didn’t want to be too far from home, but far enough that I got the college experience.”

Not only was the location and appeal of staying close to home a strong one, Colorado competes in a conference full of talent, providing a stiff level of competition for the defensive stalwart.

“It’s in the Pac-12 and a great conference,” she said. “I know that I will be constantly challenged with the level of play. I really like the new coaching staff and what they are doing with the program. I already feel like I have a connection, so that makes me even more comfortable.”

Then, of course, there were the little things about the school itself that made it the whole package for Vidger.

“Boulder has beautiful campus with the backdrop right next to the mountains,” she said. “The academic support they give their student athletes was important to me and the areas I am considering studying are strong programs there.”

Another player not lured too far away from home, it was the people at the school that really helped Michele Micciche make her mind up.

“High Point is not only an amazing school with a good soccer program, but the players on the team, as well as the coaches, Marty [Beall] and Brandi [Fontaine], are just amazing people and I can’t imagine spending four years of my life with anyone but them,” Micciche told TopDrawerSoccer.com.

On the field, the team looked to provide the sort of challenge that Micciche was searching for as she evaluated college options.

“The soccer program is just what I was looking for, a competitive D1 school where I can compete day in and day out with my teammates for positions,” she said. “While at the same time, loving and encouraging them on and off the field. That being said it is also extremely competitive, which is just what I love.”

A lot of Brittany Fary’s decision to commit to East Carolina boiled down to the confidence instilled in her by Rob Donnenwirth and the rest of his coaching staff.

“They have a great, dedicated coaching staff that continues to develop elite player,” Fary told TopDrawerSoccer.com. “The girls are focused on striving towards their goals together. They also know how to have fun on the way to success.”

The midfielder from Northern Virginia also was intrigued by a recently completed renovation to the school’s athletic facilities, which also included the soccer field. There was also a philanthropic angle to her decision.

“Something that I found at ECU that I didn't find in many schools is their high involvement in the community,” Fary explained. “They are involved with a great non-profit organization called Riley's Army, who help support families affected by childhood cancer.”

Midfielder Kenzie Winters (Concorde Fire) committed to Georgia State for the class of 2014.

Goalkeeper Laura Taylor (Michigan Gators) committed to Detroit(w) for the class of 2013.

Goalkeeper Ashley Cox (Herndon FC) committed to Slippery Rock for the class of 2013.

Midfielder Clarissa Kirsch-Downs (Freestate SA) committed to La Salle for the class of 2014.

Forward Carmen Webster (Texas Rush) committed to UTEP for the class of 2014.

Defender Hannah Bricker (Real Colorado) committed to Denver for the class of 2015.

Forward Megan Massey (Real Colorado) committed to Tennessee for the class of 2015.

Midfielder Lauren Lucas (Charlotte Soccer Academy) committed to Dartmouth for the class of 2015.

Defender Melissa Wood (MVLA) committed to California for the class of 2014.

Midfielder Alexandra Price (AC Delray) committed to Alabama for the class of 2014.

Defender Hannah Coy (AC Delray) committed to Yale for the class of 2014.

Midfielder Macayla Edwards (FC Florida) committed to Florida State for the class of 2015.