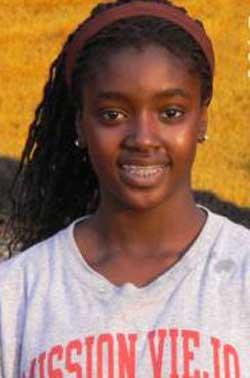 Jamilah Tejan is heading all the way across the country for her college. The Southern California defender made her verbal commitment recently to Tennessee.

Tejan also cited the coaching staff for helping to make her feel welcome.

“I knew that Knoxville was the right fit because after talking to coach [Brian] Pensky for the first time, I felt very comfortable with him,” Tejan added. “I could tell he wasn't just looking for someone to put on his roster, but he actually valued and wanted to get to know me.

“During my visit, he had meetings set up with important academic staff, and took the time to go to them with me; so I knew he really wasn't only finding a soccer player. I also had the feeling that everything he said to me was honest, and not an act.”

The West Coast FC standout also had interest from a number of schools including Dartmouth, Princeton, Iowa State, Michigan, Rochester(w), and a number of others in California.

“The recruiting process was at times very stressful,” Tejan said. “Choosing a school is a very hard decision, so the process felt very long. Now that I am committed and the hard word has paid off, a weight on my shoulders has been taken away.”

A recent soccer summer camp experience convinced Natalie Goodman that committing to Georgia was the right decision to make.

That wasn’t the only reason for her commitment, but it helped her finalize the process.

“While I was there, I really got a good feel for the school, the atmosphere, the girls, and the coaches, and I felt like it was home,” she wrote TopDrawerSoccer.com in an email. “I thought a lot about whether I should go somewhere that might win a national championship tomorrow (with or without me) or whether I wanted to go somewhere I could be an immediate part of preparing a team to win a national championship in the next few years.

“Georgia has the recruits and the coaching staff in place to move into its own on the national level, and I want to help make that happen.”

Goodman, who gave background on her search last month, was particularly excited about the prospect of staying close to home near her family so they could come watch her play.

She also thinks the soccer program has big things ahead of it.

“All of the girls on the team seemed very excited about the potential of the program, especially with the next few recruiting classes,” she said.