Florida might not be as recognized on the national level, but is an annual competitor in the tough SEC and consistently in the mix for a spot in the NCAA tournament. And it’s also where Talise Romain found everything she was looking for in a college program. 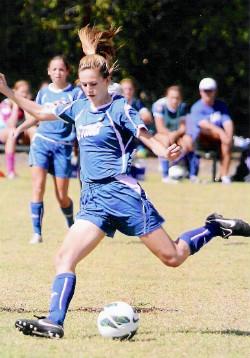 “I absolutely love the University of Florida and could not have picked a better fit for myself,” she told TopDrawerSoccer.com. “I would say the biggest reason that I chose my school was its atmosphere. It just felt right from the beginning. I knew without any doubt in my mind the first time I stepped on campus that I was home. The campus has easy access to all of the facilities and quite beautiful.”

This wasn’t just a decision about soccer; however, as Romain was also enticed by what the school offered her from an academic perspective. Unlike a significant number of her peers, she has a very specific major in mind.

“I want to major in Entomology and UF offers me the opportunity to pursue my choice with one of, if not the best, programs in the country,” she said. “They have an amazing butterfly collection and habitat – truly a beautiful spot on campus. This school will not only push me as a growing athlete but work me even harder as a student and I look forward to the challenge.”

With regards to the soccer team, the coaching staff certainly made an impression on Romain, and she also noticed similarities between her current club team and the style of play the Gators try and trot out on the field.

“I adore the wonderful role model players whose footsteps I will soon follow,” she said. “I feel even more blessed and excited to play for Becky Burleigh, the SEC Coach of the Year, who has welcomed me into the family. Becky and her entire staff are all excellent mentors for me and I know they will push me to develop to the highest level possible. Their style of play is exactly what I do right now with my club team Team Chicago Academy Santos.”

Sometimes, all it takes to convince a prospective recruit to make a commitment is a strong rapport with the coaches.

That’s what happened to Blair Thorpe on her college search, as she eventually selected a program that was not too far from home.

“I visited other colleges and had some great conversations with college coaches, but I felt the greatest connection with head coach Chris Petrucelli and assistant coach Nicole Nelson at SMU,” Thorpe told TopDrawerSoccer.com. “They both attended many of my Sting games and got to know me as a player and person. The team and everyone I met in the athletic department was very welcoming. Although I live in the Dallas area, I had never actually visited SMU’s campus until my first recruiting visit. I love the campus, the athletic environment and the academics that SMU offers.”

This coming fall marks Petrucelli’s second in charge of the women’s soccer program at SMU, and Thorpe is optimistic she will become part of a team that has grown in national stature between now and 2015.

“I have an opportunity to be a part of a great soccer program that is going to be highly competitive under the leadership of coach Petrucelli,” she said. “I think my style of soccer playing at Dallas Sting fits well with SMU’s style of soccer. I was very impressed with the athletic facilities and the academic advisor for the players.  The academic support for the players is incredible."

Midfielder Madison Haycraft (Kentucky Fire) committed to Evansville for the class of 2014.

Forward Julia Stirpe (PDA) committed to Rutgers for the class of 2015.

Defender Chelsea Burns (Eclipse SC) committed to Duke for the class of 2015.

Forward Amanda Shaw (Carmel United) committed to Missouri for the class of 2014.

Midfielder Hailai Arghandiwal (Pleasanton Rage) committed to Santa Clara for the class of 2014.