Girls Commitments: The lure of the ACC The desire to play in the ACC is a refrain often echoed by many of the top recruits in the country – boys or girls. 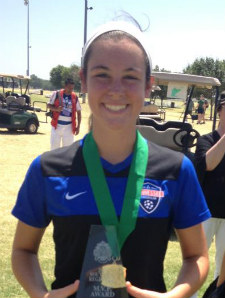 And that drive helped Callie McKinney ultimately make her decision to commit to a program that will join the ACC this summer.

“Wanting to play in the ACC was a top priority and the new soccer facility is amazing, tops in the country,” McKinney told TopDrawerSoccer.com. “I just felt very comfortable with coach Karen [Ferguson-Dayes] and her staff.”

A strong and physical ball winner, the continuity surrounding the program was definitely another plus, along with the team’s new stadium, which is in the process of being built.

“I found that coach Karen has stability of being head coach at Louisville for 14 years, her academic advisor played at Louisville and has been her only academic advisor and has been with the university 20 plus years,” McKinney said. “The assistant athletic director played at Louisville for coach Karen and also the strength and conditioning coach Heather. So it felt like people come here to play and stay with the university, so there is a strong sense of stability.”

McKinney is the school’s first reported verbal commitment for the class of 2016.

After a long national search, many trips and visits from coast to coast, Goalkeeper Lauren Spencer has committed to Hawaii Pacific University on Oahu, Hawaii.

"My search was driven not only by soccer but by my passion to study marine mammalogy in college."

Finding the perfect balance isn't always easy, but coach Brewer at HPU made it easy with their style of play and place for her on the team.

"She is an amazing coach who cares about the whole player and not just what I do on the field.  Her passion for the game is inspirational and contagious, and her manner of coaching is just the best fit for me, someone I can talk to and learn from all at the same time."

On the academic side, Specer also knew this would be the best fit.

"HPU has an amazing regional marine mammal stranding program that attracted me academically as well as the obvious marine life that abounds in Hawaii offering endless research and hands on opportunities,” she said.

A move south got the ball rolling on Justine James’ commitment to a North Carolina university. The speedy forward moved to North Carolina from Connecticut, and quickly took a liking to staying in her new state for college.

From there, it wasn’t long until UNC Asheville became the front runner.

“I knew the moment I stepped onto campus at UNC Asheville, met [coaches] Michelle [Demko] and Joey [Sasvari] and the players that it was the perfect fit for me,” James told TopDrawerSoccer.com.

James also liked the family feel she saw within the team, and how all the athletic teams support one another. She knows that the school can take care of her in the classroom as well.

“UNCA has amazing academics, I want to major in Business Administrations & Management and they have great business accreditations,” she said. “I love the small school feeling, especially in the classroom.”

James is the second commitment for UNC Asheville for the class of 2015.

Forward Charley Prevost (Seacoast United) committed to George Wasington(w) for the class of 2015.

Midfielder Opal Curless (FC Stars of Massachusetts) committed to Syracuse for the class of 2016.

Forward Sunny Dunphy (Carlsbad SC) committed to UCLA for the class of 2016.

Midfielder Kennedy Smith (Strikers FC) committed to Washington for the class of 2016.

Defender Emma Frances Thompson (Huntsville FC) committed to Samford for the class of 2015.