One of the top rated players in Pennsylvania heading to Penn State? Never a surprise.

Haleigh Echard will join the 15-time Big Ten regular season champions in the fall of 2014 after coming away impressed by head coach Erica Walsh’s national power. 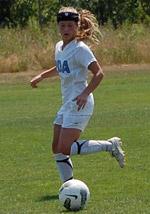 “The school itself is absolutely wonderful, and everybody at Penn State is so supportive and welcoming,” Echard told TopDrawerSoccer.com. “The other sports programs at Penn State are also successful and it just adds to the excitement.”

One of the biggest factors in college recruiting these days is the simple things off the field: the locker rooms, stadiums and practice fields available, to name just a few. Echard liked what she saw up in Happy Valley.

“The facilities at Penn State are also top notch,” she said. “They want the best from their athletes so they try to give them the best.”

“The coaches at Penn State are so easy to talk to and work with,” she said. “On and off the field they want what is best for their athletes. Their academic programs are extensive and solid, and I know I will get a great education there.”

With the number of visits that college prospects go on throughout the recruiting process, a lot of things can start to standout.

The team, campus, school, players – the list is lengthy of what players are looking for. But it was the vibe given off by the campus of Dayton that really appealed to Caitlin Carroll, who recently committed to the Atlantic 10 program.

“I had been on quite a few campus visits and there was just something about the community feeling at Dayton,” she told TopDrawerSoccer.com. “Everybody was so friendly, and I was really impressed with their academics.”

As for the soccer team, Carroll – an extremely competitive player – liked how successful the team has been of late. However, that was far from the only thing she liked about them.

“I love their style and pace of play,” she said. “Their games are really intense, and everybody works hard all the time.  I also really connected with Coach [Mike] Tucker and his assistants. The girls had great things to say about him, and I could just tell that he takes a lot of pride in their accomplishments and he cares about the players on and off the field.”

Off the field, Carroll won’t be too far from her native Michigan, a huge appeal when it comes to establishing a balance of being close but not too close.

“I liked the fact that it’s only four hours from home, but far enough that I can be independent; and the campus exceeded my expectations – the size seems just right to me, and it’s beautiful,” she said.

For Lauren Jankowski, when it came to South Carolina, there was a laundry list of things that appealed to the PDA attacker.

“I decided to commit to South Carolina because the overall team spirit was contagious and exciting,” she told TopDrawerSoccer.com. “I fell in love with the campus when I first visited, especially the ‘horseshoe’ and the training facilities, and the coaches were very welcoming. The first time I met the coaches they made me feel as if I had known them forever.

“As I went through the recruiting process, I realized I wanted to go south for college and University of South Carolina offered everything I was looking for as a player and student.  It has always been a dream of mine to play for a large D1 program and South Carolina is the perfect fit for me.”

Jankowski wasn’t too worried about going too far away from her native New Jersey, as she preferred to find the right school, rather than worry about staying closer to home.

“I knew I wanted to attend a big school that loved sports but was also strong on the academic side,” she said. “South Carolina fit that perfectly. Even though South Carolina is far from my home in New Jersey, I hope to make South Carolina my new home. The campus and feel of the school matched everything I wanted and when I first visited I knew it would be my new home.”

Midfielder Amanda Borstelmann, of East Meadow SC (New York) committed to Louisiana-Monroe for the class of 2013.

Defender Cassidy Page of North Shore United (Wisconsin) committed to Northern Illinois for the class of 2013.

Goalkeeper Riley Riordan of the Minnesota Thunder, committed to Northern Illinois for the class of 2013.

Lauren Gierman of Sockers FC, committed to Northern Illinois for the class of 2014.

Midfielder/Forward Mary Ashton Lembo of MFC Fire (Mississippi) committed to Louisiana-Monroe for the class of 2013.

Defender Margaret Rivera committed to Northern Illinois for the class of 2013.