Girls Commitments: Two for the Big 10 An aggressive and confident goalkeeper in the ECNL, Jordyn Bloomer found her optimal program without looking outside her native state of Wisconsin. 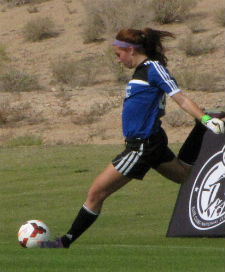 “One of the main reasons I chose Wisconsin was because of the coaching staff,” Bloomer told TopDrawerSoccer.com. “From the trainings and games I saw, goalkeeper coach Tim Rosenfeld always had a high-intensity and high-energy coaching style that I knew I would fit into perfectly. Head coach Paula Wilkins had a way to connect with her players to help get the team focused and ready for trainings and games which is vital for any team’s success.”

The coaching staff obviously left a significant impression on Bloomer, who will work directly with Rosenfeld to hone her craft. But outside of soccer, she was also drawn to the program by the university’s spirit.

“Wisconsin students are extremely prideful and on game day the whole campus is wearing red,” she said. “It is a really cool experience to walk through campus and see every other person wearing as much Wisconsin apparel as they can find. Aside from school spirit, Wisconsin also offers amazing academics on a beautiful, lake front campus.”

Bloomer is the second commitment to Wisconsin for 2016.

Athleticism and quickness are two traits that Claire Graves lists as her strengths. The shot-stopper tries to snuff out dangerous chances by communicating and organizing her back line.

A thorough college search led her to a Big Ten program.

“After visiting about eight different schools, it was obvious to me that Iowa had the right combination of academics and athletics that I was looking for,” Graves told TopDrawerSoccer.com. “Everything about the school seemed right.”

“The coaching staff is a very welcoming one that I immediately came to like and I feel like they will be able to help me achieve my maximum potential,” Graves said. “In addition, Iowa is a top team in the Big Ten, which is a very competitive conference that I have always wanted to play in.”

Graves is the first verbal commitment to Iowa for the class of 2016.

Defender Briana Alston (FC Virginia) committed to Florida State for the class of 2016.

Goalkeeper Sophie Milich (Albion Hurricanes) committed to Auburn for the class of 2015.

Midfielder Michaela Finneyfrock (FC Bucks) committed to Saint Joseph's for the class of 2015.

Midfielder Julia Phillips (FC Virginia) committed to Florida State for the class of 2016.

Midfielder Alexis Thornton (Solar Chelsea SC) committed to SMU for the class of 2016.