For Hannah Ciolek, one of the highest-rated goalkeepers in her class, picking Boston University was about selecting one of her top options.

“From the get go, I had BU on my top list because of the academics, and then once I visited, I was immediately attracted to the atmosphere,” she told TopDrawerSoccer.com. “I’ve never lived in a city so the huge city vibe is really exciting to me. The really special part, I noticed, is that the field is located right in the middle of the dorms and the campus, while being large, is very intimate.” 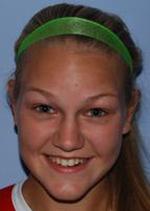 Along with the chance to live in a city, the program felt like the right fit.

“A combination of the academics and athletics sold me on Boston University,” she said. “Coach [Nancy] Feldman really made me feel welcome and gave me confidence that I would make an impact on the team. BU just fit the bill with everything that I had on my original list during my college search process and I’m really happy with my decision.

Fitting with the coaches – not just Feldman – was icing on the cake for the Pennsylvania shot stopper.

“I knew from the beginning that the coaching staff would have a huge impact on my decision,” she said. “Each of the coaches demonstrates a firm but encouraging style that was exactly what I was looking for. The whole team, I noticed on my various visits, has a family feel and they all work hard and have a strong passion for the sport, which is a great mindset that I value. Between the turf, the weight room, and training room, the facilities convinced me that the school valued the soccer team.”

A competitive goalkeeper, Mara Dougherty decided that committing to stay in state was the right decision for her – and that bond with one of the state’s most prominent institutions had a big impact on her.

“I decided to commit to Minnesota because it seems like a great fit for me both academically and athletically,” she said. “Growing up in Minnesota the Gophers have always had a presence in my life, so now to be a part of it is something very special.”

When she gets on campus next fall, Dougherty is planning on pursuing a business degree in the School of Management, another big pull for her.

The level of play that she’ll step out onto sealed the deal.

“I like that Minnesota is part of the Big Ten conference and in Division 1,” she said. “It's always been a dream of mine to be able to play at the highest level, and I think this program has excellent coaches and players that are looking to do great things."

Allison Carroll, a defender for Vardar, committed to Central Arkansas for the class of 2013.

Rebecca McGrath, from Seacoast United SC committed to Presbyterian College(w) for the class of 2013.

Brenda Kaiser, from North United (Pittsburgh) committed to Cleveland State for the class of 2013.