At the beginning of September, Kirsten Timmer made it official – she was going to make the commitment to Big East program Marquette.

“Marquette was the perfect fit for me both academically and athletically,” Timmer told TopDrawerSoccer.com. “Marquette is academically very strong in several of my areas of interest and the soccer program consistently ranks among the top programs nationally.”

The decision came after a very lengthy and involved search for the right fit, as she scoured several corners of the country. 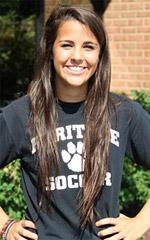 “I really enjoyed the recruiting process, and I feel very fortunate because I was able to visit some wonderful campuses and meet with some outstanding coaches,” she said. “I had an opportunity to explore schools from many conferences including the ACC, Big 10, Big East, MAC, Mountain West and Conference USA.”

Because of her thorough process, it made it all that much easier to make the verbal commitment to the Wisconsin-based program.

“From the moment I stepped onto Marquette's campus, I felt I had found my extended family,” she said. “The atmosphere surrounding Marquette soccer is so dynamic and welcoming that I felt an immediate connection with the program.  I was looking for a school with both excellent academic programs and a strong soccer history.”

Natalie Perussault found the right college soccer program without having to bolt off the East Coast. But it wasn’t the location that swung the decision in favor of Massachusetts.

“I decided to commit to University of Massachusetts because it isn't only a good D1 soccer school but also is extremely good academically to help me challenge myself,” she told TopDrawerSoccer.com. “There are many majors to pick from with it being part of the Five Colleges consortium. Also when my mother and I went down there to visit I loved everything about the atmosphere, the campus, and all of the surroundings.”

Of course the team itself, which competes in the Atlantic 10, also caught her notice, and she really likes the direction the program’s fortune is moving in.

“The soccer program at UMass is one of the best in the Northeast,” Perussault said. “I feel that I will be challenged to be the best I can be. Coach [Ed] Matz has really made an impact within two years and I believe he will push the team to the top of their conference. I can't wait to see what he does by 2014.”

At the end of the day, the decision was simply finding the program that felt right.

“I really wanted to go to a large division one school,” she said. “The location or climate was never a deciding factor for me. Over the past year I've gone to a few schools but once I was at UMass and got to see the whole campus, town and meet the coaches/girls I just knew it was the right college for me.”