A hard-working forward from the U15 ECNL National Champions San Diego Surf, chasing a dream to play collegiate soccer in the Pac-12 is something that Jordyn Dicintio will now realize in a couple of years.

A plethora of reasons drew her attention north to Washington State. 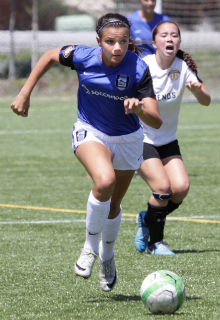 “After visiting the Pullman campus and speaking with the coaches I knew it was where I wanted have my college experience fulfilled,” Dicintio told TopDrawerSoccer.com. “They provide a great amount of academic support with advisers who monitor your classes to make sure you stay on track while meeting the demands of college soccer Everything about it suits me; it already feels like home.”

The soccer team also felt like a good fit for Dicintio, from the way the team played on the field to the coaching staff.

“I liked how well I was able to see myself fitting into the team's style of play,” she said. “I was grateful to coach [Steve] Nugent and coach [Jon] Harvey for doing everything in their power to make me feel as welcome as possible; I feel as though their coaching style will be a good fit for my style of play. Also I like how the team has its own personal performance specialist. He is strictly for the soccer team's needs and has incredible injury prevention methods that I can't wait to start. I also found myself fitting in with the players very well, everyone made me feel so welcome on my unofficial visit.”

A friendly campus was another plus, something that made Dicintio very comfortable with the idea of one day becoming a Cougar.

“I liked the chemistry between the students, as well as the staff,” she said. “Everyone seems to know each other, and if they don't, they make themselves known. It reminds me of the way things are where I'm from. The campus isn't too small or too big, and everything is in walking distance. I'm looking forward to living in the brand new dorms that will be completed by the time I am a freshman. Also, they have one of the top communications programs in the country, my intended major.”

The pipeline at Westwood continues to lure the best and brightest talent from Southern California.

The latest is 2017 recruit Ashley Sanchez, checking in at No. 15 in the IMG Academy class rankings, and a veteran of U14, U15 and U17 Girls National Teams. A skilled, tactical midfielder who can pop up and finish, she found plenty to like about the school and soccer team that convinced her to stay close to home.

“There were a number of reasons why I choose to commit to UCLA,” Sanchez told TopDrawerSoccer.com. “First being location, I love Southern California and wanted to stay close to home. I feel fortunate, that my family and friends will be able to attend my games. Secondly, was the high academics standard that UCLA has for all students. Thirdly, the great incoming recruiting classes that Amanda [Cromwell], Josh [Wilson] and Lou have assembled for 2015 and 2016. I’ve had the privilege of playing with a few of the recruits at the national level: Mallory Pugh, Annika Rodrigues, Marley Canales, and feel confident that they will keep UCLA at the top of the ranking list for woman soccer.”

UCLA also plays a way that can attract top talent, and it’s another facet of the program Sanchez liked.

Goalkeeper Alex Best (So Cal Blues) committed to Cal State Northridge(w) for the class of 2015.

Defender Peyton Joseph (Real Colorado) committed to Missouri for the class of 2016.

Forward Taylor McMorrow (San Diego Surf) committed to USC for the class of 2016.

Defender Sophia Dertorossian (De Anza Force) committed to Maryland for the class of 2016.

Forward Lauren Marin (So Cal Blues) committed to Portland for the class of 2015.