A player who takes pride in her ability to anticipate plays before they happen, goalkeeper Leanne Wolf liked everything local program Cal Poly had to offer on and off the field. 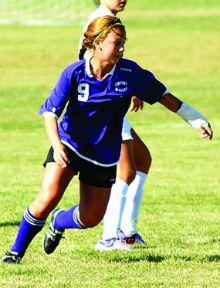 “I committed to Cal Poly because it has a great program and is a great school,” she told TopDrawerSoccer.com. “All the coaches and players are very welcoming and it just felt like home. It's close to home too, so it'll be nice that my family can watch my games."

The program has made significant strides in the Big West recently, and Wolf thinks the coaching staff is ready to keep putting in the hours in order to continue that trend.

“Cal Poly is [Division I] which is awesome itself, but once you actually talk to the head coach Alex Crozier, you realize how much work and love he puts out to make the team the best it can be,” Wolf explained.

From the classroom side of things, Wolf said that the school is “fantastic” and had everything that she was looking for.

“They have so many interesting majors, I just couldn't see myself going to or playing at another school,” she said. “It's a very hands on school so it should be pretty exciting.”

Wolf is the third commitment to Cal Poly’s 2015 recruiting class.

The Utah Avalanche has supplied its share of standout strikers to the Division I level over the past few years.

Kennedy Yost will look at add her name to the list after verbally committing to Oregon for the class of 2016, as she was eager to test herself at the level the program offers.

“I chose to commit to Oregon because of their high competition, the Pac 12, and I liked the location,” Yost told TopDrawerSoccer.com.

Yost wanted the chance to compete in the Pac-12, and she liked the school’s coaching staff and the direction the team is heading. Oregon has a handful of solid recruits lined up over the next couple of years.

The area also seemed like a natural fit to her, not to mention the academic side of things.

“The school aspect of Oregon worked out perfectly for me as well,” she said. “I know I will get everything I need academically to succeed and achieve my goals.”

Five players, including Yost, are verbally committed to Oregon for 2016.

Forward Carina Baltrip-Reyes (Dallas Texans) committed to Florida International for the class of 2016.

Midfielder Allison Vickers (FC Bucks) committed to Colgate for the class of 2015.

Goalkeeper Olivia Post (Sockers FC) committed to Nova Southeastern for the class of 2015.

Defender Megan Delmonico (Colorado Rush) committed to Mercer for the class of 2016.

Defender Emily Boyd (Sockers FC) committed to Lynchburg for the class of 2015.

Goalkeeper Regan Gibbs (Crossfire Premier) committed to Kansas for the class of 2015.