Taylor Haynes’ first exposure to the Big Ten program came during a summer soccer camp experience after her freshman year of high school. 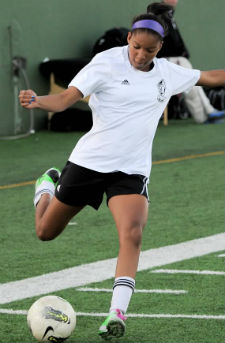 She enjoyed the atmosphere and getting to know head coach Janet Rayfield, and the academic opportunities ultimately helped her make her choice.

“Illinois has a highly regarded engineering program, and I plan to major in Chemical Engineering,” Haynes told TopDrawerSoccer.com. “Additionally, Illinois is a top ranked soccer program and will be challenging, but I will continue working hard so that I can be ready to contribute when I come there in the fall of 2016.”

Haynes is the second verbal commitment to Illinois for 2016.

A defender for the San Diego Surf, Niamh Nelson’s Irish heritage allowed her to represent the Republic of Ireland’s U19 in UEFA qualifying competition early this year.

Nelson’s next stop back on U.S. shores is slated to be Kentucky, after verbally committing to Louisville.

“I decided to commit to the University of Louisville because it's somewhere I can see myself growing not only as a soccer player but as an individual,” Nelson told TopDrawerSoccer.com. “The team has a family feel to it, the coaches are all there to help you improve in all aspects of life, and the school's community is unlike any other. I felt that the school was a perfect fit for me.”

The opportunity to play ACC soccer was a huge part of her decision.

“What I like about the soccer program is the fact that I get to compete at the highest level of college soccer for four years,” Nelson explained. “I have coaches that believe in me, are willing to give me a chance, and will help me improve as a player. I am grateful to have the opportunity to play and attend such an amazing school.”

Nelson is the third verbal commitment to Louisville for the class of 2016.

A native of New Jersey, it didn’t take Rachel Sorkenn very long to realize that South Florida was the right place for her to play college soccer.

“From the first moment I stepped on campus and met Coach Monroe, I knew that Miami was where I wanted to spend my collegiate career,” Sorkenn told TopDrawerSoccer.com. “Coach Monroe, Coach Dylag and Coach Hart are building such a great program. They’re creating an environment where each player will not only improve on the field, but just as importantly, develop and grow off the field and in the classroom, for our lives after college.”

Sorkenn learned how quickly the recruiting process moves this year, as the Miami coaching staff first saw her at the PDA Showcase in May. After a trip south for an ID camp, Sorkenn had the chance to experience the campus and program up close, which helped sealed her decision.

“The coaches, players, academic advisors and administrators made me feel incredibly welcome and comfortable, making my decision to commit an easy one,” she said. “The opportunity to compete in the ultra-competitive ACC conference is a privilege. The added benefit of South Florida’s great weather, especially compared to New Jersey’s cold winters, is icing on the cake.”

Sorkenn is the first verbal commitment to Miami (FL) for 2017.

Midfielder Tarah Patterson (Pride SC) committed to Washington State for the class of 2016.

Midfielder Sarah Chamberlin (Real So Cal) committed to Army for the class of 2015.

Forward Mackenzie Vlachos (FC Stars of Massachusetts) committed to Syracuse for the class of 2017.

Goalkeeper Claire Kong-Johnson (Leahi SC) committed to Princeton for the class of 2015.

Midfielder Mary Witkowski (Eastside FC) committed to Pacific for the class of 2015.