Over the past few weeks, a number of top girls from the 2013 and 2014 have made college commitments. We caught up with a handful of them to see what fueled their decisions.

Last month’s decision to verbally commit to Stanford was a weight off the shoulders of Andi Sullivan.

“It is a gigantic relief to make my commitment,” she said. “The process was difficult for me because I met several wonderful coaches who were fantastic mentors. In the end, I was happy not because the process was finally over but because I could focus on the next step I'll take in a few years. I can't wait to be on campus and a part of the team. 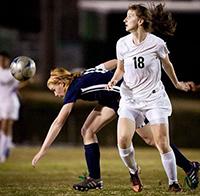 For Sullivan, the U.S. U17 Women’s National Team player in the midst of preparing for the CONCACAF qualifying tournament and push for a World Cup spot, her final four of Duke, Virginia, UCLA and Stanford made it an incredibly difficult decision to make.

But the Cardinal eventually won out.

“So many things about Stanford excite me,” she said. “It is a wonderful opportunity for a great education and a chance to play some great soccer. I could really picture myself playing in their stadium and living on campus.”

Meanwhile, Sullivan can now switch her focus on helping the U.S. qualifying for the U17 Women’s World Cup later at the beginning of May.

Many things stood out to Angela Waddle as she made her decision as to where to play in college. But one thing helped tipped the balances in the favor of the SEC program – location.

"I've always been interested in Vanderbilt,” she said. “I love that part of the country and after visiting, I couldn’t have been more impressed with the school, the facilities and the city of Nashville.”

The midfielder on Eclipse Select U16s won’t be heading too far from her native Illinois for school and believes she’s managed to secure everything by make that decision.

“It has everything that I'm looking for: a great academic institution, a great soccer program in a big conference, and in the heart of a beautiful city,” she said. “I am very excited about playing for Coach [Derek] Greene and I look forward to the challenges that lie ahead on the field and in the classroom."

A high-scoring forward (with 18 goals in 25 games in the ECNL this year) Meaghan Carrigan is leaving the state of South Carolina for school.

But she won’t be too far away, two states north at the University of Richmond.

“I chose Richmond because as soon as I stepped on the campus, I felt at home,” she said. “The campus is gorgeous it's in a great location not too far away from home. I also love coach [Peter] Albright's philosophy about balance between school and soccer.”

After almost making a commitment earlier in the year, Carrigan decided to take her time and recently made the decision to head to Virginia’s capital. In the end, it was a matter of Richmond checking all the boxes for her.

“All along my goals were a great school, a great soccer program, balance, and a wonderful college experience,” she explained. “The chemistry of the team was also very important to me. Richmond seemed to match everything I was looking for.”

Chistyna Pitre is another player who is leaving her home state for school, but the midfielder felt at ease committing to LSU.

“Having family in Baton Rouge made my decision to become an LSU Tiger easy,” Pitre told TopDrawerSoccer.com.

The former U.S. U15 national team player said her decision came down to LSU, Texas, California, and Santa Clara. Ultimately, the Tigers won out.

“I love the big campus feel that LSU presents and the competition in the SEC,” Pitre said. “I felt lots of support from the LSU coaches. They made me feel that they were very interested in my style of play.”

University of San Diego is one of the most beautiful campuses in the country, and an easy sell for the coaches there.

It only took Rachel Conners, a standout midfielder from Southern California, two days to figure out it was the place for her.

“When I made the decision on USD, it was about two days after my unofficial visit,” Conners said. “I was talking to my mom about it, and realized that I was only praising it and in my mind I could easily see myself going there. All in all, I knew it was a place I could call home right when I got on the campus.”

Conners revealed that her decision came down to USD, Portland, and some Ivy League schools, but it was USD that really had everything for her.

“First of all, I love the area of San Diego, having lived there for about four years,” Conners added. “Secondly, the environment on campus was amazing. I definitely saw why USD has a great academic reputation, but I also saw how the students have a great environment to prosper in.”

Having a very strong program can’t hurt either. The Toreros are coming off a league title and a trip to the Sweet 16 in 2011.

“I saw them train and I loved how everything was set up,” Conners said. “It was very focused on making the team raise their standards with everything they did. I really liked the head coach, Ada Greenwood, for I could tell he really invested his time in his players and he is an honest man.”