Uncommon is the most apt word for the KCFC Alliance ECNL U16 team.

KCFC stormed through the regular season this year with a 15-0-0 conference record that included 69 goals scored and only seven conceded.

The team’s success, in part, came from its unique formation. Head coach Huw Williams trots his squad out in a 3-4-3, which is far from normal in elite girls soccer.

From the opening whistle to when the other team says mercy, it is all out attack, which has drawn the attention of college coaches across the country – to both the style of play and the talented and athletic players who make it look simple. 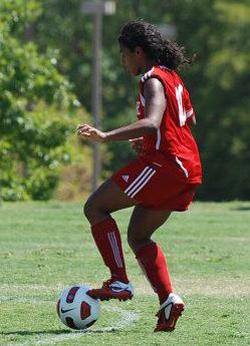 One of the key cogs of that offensive onslaught is midfielder Elizabeth ‘Lizzie’ Luallin, who has one goal and six assists in 22 games played this season. The stats and contributions have a few college coaches looking closely at the Kansas-native with ODP experience.

“Several schools have expressed interest in me including schools from the Big 12, Big East, and SEC,” Luallin told TopDrawerSoccer.com about the recruiting process. “I plan on making a decision later this summer after visiting a few more schools.”

Playing in front of the clipboards of college coaches has been no sweat for the midfielder, as she is enjoying the journey.

“For me, the recruiting process has been interesting and exciting,” she said. “I have learned a lot about different colleges and coaching styles.”

Luallin added that the strength of the school’s academics is the most important factor in her search.

Laya Rybicki is tuned into what college is really about.

“The most important factor in my search for a college would be education,” Rybicki told TopDrawerSoccer.com. “Whether it is a DIII school with the best program for my specific needs and major, or a DI school, education is the top priority.”

The dynamic striker from Challenge SC and The Woodlands, one of the best high school teams in the country, has a plenty of suitors for her commitment, but it has not been easy for her.

“The recruiting process has been difficult, and time consuming for me because it’s hard to put all of your thoughts about yourself and the school into an email or phone call,” Rybicki revealed. “But I have to stay positive and keep in touch with the coaches.”

The forward from the Lone Star State said that location was not really a factor in her search, but, ironically, does “prefer the cold.”

Rybicki, who was voted onto the all-event team from the ECNL Showcase in Sanford, added that North Carolina was top of her list of dream schools with Stanford, Notre Dame, and UCLA also at the top of the list.