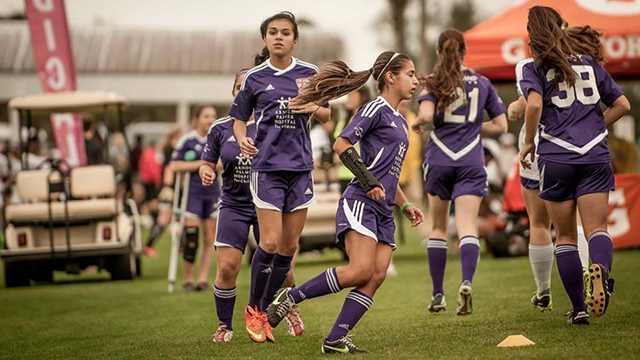 SANFORD, Fla. — Day two of the ECNL Winter Showcase kicked off on Sunday with similar conditions as the opening day, but today’s fixtures were goal-heavy as the elite teams seemed to find their groove.

In the three games featured in today’s recap, a total of 12 goals were scored. Check out the results below.

Ohio Elite Soccer Academy Striker Abby McNamara led her side to victory on Saturday morning. After a tightly contested opening twenty minutes between OESA and OCYS, McNamara would come alive in the final third and score four goals to lead OESA to a resounding 7-1 victory over Orlando City Youth Soccer.

The striker’s first goal of the match stemmed from a flick from Midfielder Paige Knorr which allowed McNamara to force her way past her defender and slide the ball under the charging City keeper.

Moments later, McNamara collected the ball with her back to goal, maneuvered past two defenders, and blasted a shot that forced the OCYS goalkeeper to parry it into the back of the net.

As the half ensued, OCYS displayed their possession based brand of soccer but would head into the half down 2-0, despite their probing efforts. To begin the second half, McNamara remained in top form and would be on the other end of the ball when OESA secured their third goal.

After a surging run down the right-hand-side, McNamara pulled the ball back across the six-yard-box to Midfielder Sydney Leshnak who placed it in the bottom corner. Deep in the second half, McNamara would secure two secure two more goals from set pieces- putting the game out of reach for OCYS.

Claire Fisher scored the final two goals for OESA with two class finishes, and Kaitlin Evans added the conciliation goal for OCYS with a booming 40-yard free kick that bounced over the OESA goalkeeper’s head.

CASL’s organization and defensive pressure was too much for the Utah Avalanche to handle on day two of the ECNL Winter Showcase.

Ten minutes into the match, their relentlessness to hound the ball yielded CASL’s first opportunity as Midfielder Emily Truelove made a piercing run down the left side. Truelove’s final ball was played to the back post for Defender Carroll, who had her strike pushed away by the goalkeeper, but Forward Emma Socha was there with the follow up to give CASL the early advantage.

Right before the half, Truelove was once again the facilitator as she found Midfielder Heather Timothy in stride with a lovely dink over the Utah backline. Timothy had enough time and space to calmly bring the ball down and place it into the back of the net.

Similar to the first half, Utah struggled to gain any momentum as CASL’s discipline and attention to detail on the defensive end continued to cause them problems. The Avalanche’s first clear chance of the match came deep in the second 45 when Kyra Fawcett found herself in a dangerous position inside the area.

Fawcett skipped by two CASL defenders and rifled a strong shot on target, forcing the CASL goalkeeper to extend and make a difficult save.

However, Truelove would put the match out of reach with a quality finish after receiving a delicate through ball from Defender Alexa Asher.

The match between Crossfire Premier and the Dallas Texans proved to be the tightest fixture of the day. Both sides were extremely physical and organized defensively, but the match also held an incredible pace when both clubs ventured forward.

In the 15th minute, however, Crossfire would take the lead when Madison Schultz produced the goal of the day.  After receiving a pass on the left side, Schultz took a sharp cut inside before blasting the ball into the top corner leaving the Texans’ goalkeeper stunned.

In the second half, Grace Cory nearly equalized the match for the Texans with a low curling effort from just outside the area that ricocheted off the post and was cleared away.

Crossfire would add another goal to their tally when Schultz went on a meandering run of her won. After skipping past four Texan defenders, Schulz unselfishly pulled the ball back for Brooke Weedman who would’ve had more difficulty missing than scoring from that distance.