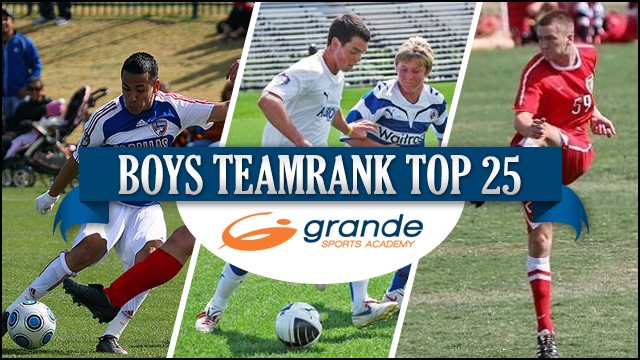 With this, the penultimate release of the Grande Sports TeamRank Top 25 for the 2015-16 season, we release the latest standings for U16, U17 and U18 Boys. Next week, we will update the older age groups on the Girls side. We will update our National Top 25 for each age group at least once per month.

Wolves enter top ten at U16

Crew Soccer Academy Wolves earned a 6-1 record in the month of May which included wins over No. 3 Sockers and No. 22 Chicago Magic. Its record of 16-5-3 puts the Wolves in second in the Mid-America division and moves them up four spots to No. 9 in our rankings.

State Cup highs and lows at U17

Only one of the top four teams in this age group, Loudoun SC 98 Red, has a 2016 state cup championship under its belt, but all four’s rankings remain nonetheless unchanged, since each qualified for the USYS National Championships in July via USYS National League play.

One team that did win its USYS state championships, however, enters the rankings for the first time after taking on some pretty stellar competition. Los Angeles Premier FC White beat No. 8 West Coast FC Wyss in the Cal South National Cup quarterfinals, No. 17 Albion SC White in the semifinals, and No. 23 RSF Attack Academy 1 in the final to earn a spot in the USYS Region IV Championships and a No. 20 ranking.

Union, United look to playoffs at U18

Philadelphia Union continues its climb as it nears the end of the regular season, earning a significant win over now No. 4 New York Red Bulls to extend its record to 17-3-5. Class of 2017 standout Justinian McMaster scored both goals in the win to lift the Union to No. 3 in the Grande Sports TeamRank Top 25.

Georgia United is coming on strong at the end of the season, earning a 5-0-1 record in the month of May and a spot in the rankings at No. 25. This Georgia United squad is not short on talent, and with U.S. Youth National Team members Patrick Okonkwo, Juan Pablo Torres, Andrew Carlton, and Christopher Goslin all on the roster, coach Dave Smith stands a chance of having a good run in the postseason.