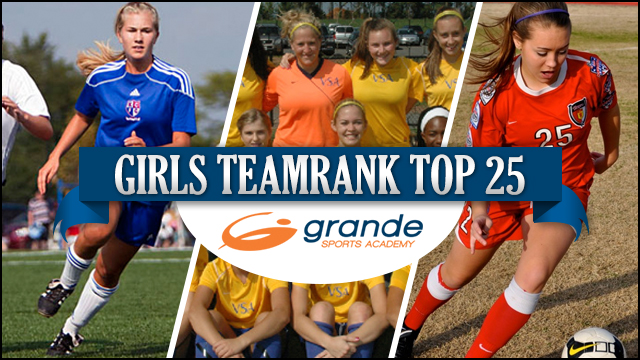 Today we unveil our latest update to TeamRank, the comprehensive ranking system for elite club soccer teams nationwide. Let’s see what has changed for U13, U14, and U15 Girls. Next week, we will update the older age groups on the boys’ side. We will update our National Top 25 of each age group at least once per month.

The CalSouth National Cup (state cup) is one of the earliest on the schedule in the U13 age group, and resembles March Madness in the number of teams represented and in the duration of the tournament. So Cal Blues “survived and advanced” over a total of 4 weekends, including a penalty shootout in the semifinal against Slammers, to be crowned champion. With the loss of former #1 Legends FC to #15 San Diego Surf White 99/00 in the other semifinal, So Cal Blues becomes the new Grande TeamRank #1.

PDA’s perfect streak continues at U14

#1 PDA O’Reilly ECNL is the only U14 ECNL team that remains unbeaten and untied in ECNL play. In April, the New Jersey-based squad’s perfection will be tested when they face #8 FC Stars with goal-scoring phenom Gabrielle Brummett (25 goals on the season) and #14 CASL.

Colorado Storm is having a great season in the ECNL and climbs from #6 to #5 this month. The team is led by seventh grader Allison Schlegel who has 13 goals and 12 assists, and Elisabeth Geraghty with 20 goals and 7 assists, but the attack is actually quite balanced with 15 different players contributing to the scoresheet in some way.

San Diego Surf’s ECNL team takes over the top spot in the rankings this month. With a perfect 7-0-0 record in conference and only one loss on the season in all ECNL competitions, the squad is also competing well outside the ECNL and recently won the top bracket at the Players’ Showcase.

Real Colorado ECNL, the only other ECNL team with a perfect record in conference play, climbs from #3 to #2 and is nipping at Surf’s heels. Rounding out the top 5 are #3 Dallas Sting ECNL, which will resume conference play in April after having a mini-break in March, PDA ECNL which is struggling a bit in conference and slips to #4, and #5 Concorde Fire who has finished its season undefeated in the Southeast Conference at 15-0-1, and awaits post-season seeding as the players break for high school.