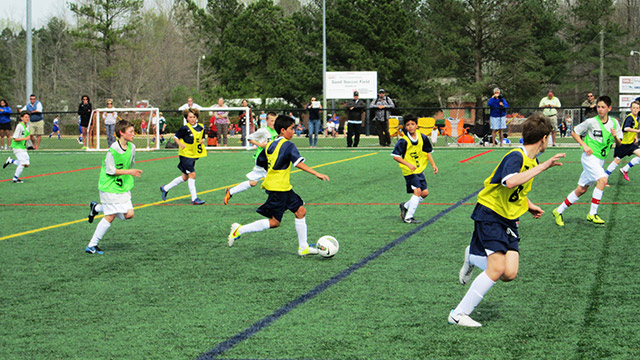 The weather was perfect at WRAL Soccer Center, with the temperature sitting right around 70 degrees and abundant clear skies.  Goals were abound in both the boys and girls games and there was plenty of talent to be seen.

Team rosters are listed below with starters in bold.

Team 4 enjoyed much of the possession through the early parts of the game, controlling the flow and pressuring Team 1. A big part of that possession and control stemmed from Brown and Pilson, two calm and collected center backs anchoring the defense.

The pressure finally broke midway through the first half of the game, when Pilson volleyed home the first goal of the game. Just minutes later, goalkeeper Burkhart made a big save in a 1v1 situation, to keep Team 1 in the game. Despite continued possession, the half ended at 1-0.

Minutes into the second half, Team 4 notched its second goal after Segal headed home a corner kick. Minutes later, substitute Rad made it 3-0 after an excellent run behind the defense and slotting home the final goal of the match.  While the score line remained at 3-0 through the final whistle, Team 1 GK Petrucci, Jr. made numerous saves in the second half to keep the scoring to a minimum.

It was evident from early on that Team Yellow was going to pressure Team Green up and down the field, hoping to force turnovers, and that’s exactly what they did throughout much of the game. Nearly halfway through the first half, that strategy paid off after a turnover led to a shot that rang off the post, rebounding right to Thompson, who put the ball into the net with ease.

Team Yellow’s pressure continued to put Team Green in difficult situations, but despite the high pressure, Green held on due to a cohesive defensive unit. The first half ended at 1-0 despite a slew of chances for Yellow and limited possession for Green.

Early in the second half, Team Yellow netted its second goal of the game, and things looked to be finished from there. Team Green forward Sample, who appeared to be playing more of a defensive role in the first half, transitioned to her better position of forward late in the second half.

She contributed immediately making a few surging runs and putting Team Yellow on its heels in the waning minutes. Sample finally broke through with just seconds left, finishing off a 1v1 with the goalkeeper with composure and ease.

The second boys match of the day started out at a fast pace, with neither team holding much possession through the early parts. Team 2 broke the deadlock 12 minutes into the game after Mangione tapped home a bobbled save from Team 3 goalkeeper.  Just five minutes later, Team 3 leveled the game at 1-1 with another tap in following a rebound.

Less than a minute later, Team 3 broke the deadlock to go ahead 2-1. And scored another in the last minute of the first half to go up 3-1.

A fantastic individual effort from Molloy resulted in Reid slamming home a shot into the roof of the net after a deflection to make it 4-1. Team 3 continued to rev up their attack, but Team 2 defender Romanello was found unmarked at the back post after a cross skirted through the box where he tapped the ball into an empty net.

Despite being back within two, Team 3 again turned up the heat, scoring four more while Team 2 netted one to make the final score 8-3 in favor of Team 3.

One of the big stories of the game was the skill of Isaiah Reid. At times, Reid took control of the game with his crafty footwork and impressive movement on and off the ball.

With 11 goals in the game, one definitely stuck out. The goal of the game came from midfielder Sean Molloy, who blasted a shot into the upper corner from about 20 yards out.

The second girls game of the day was one of the more exciting games of the four. Team Yellow scored three unanswered goals in the first half, with Amelia Paternoster having a hand in all three – scoring two and setting up another. In the final second of the half, Team Green's Alicia D'Aoust pulled one back with a very hard shot into the top corner that left the goalkeeper with little to no chance.

In the second half, the action really picked up as Team Green continued to pressure and look to make up the two goal deficit. To set up a frantic final few minutes, Hannah Telleysh combined with teammates up the field and finished a great play in style with a shot past the outstretched arms of the keeper.

With just minutes remaining, confusion along the Team Yellow back four after an offside restart, resulted in an indirect free kick given to Team Green at the top of the six-yard box. Frantically getting a wall set, Team Green rushed to take the free kick and it was blocked by the wall.

Despite a brave effort at the end of the game from Team Green, Team Yellow went home as 3-2 victors.