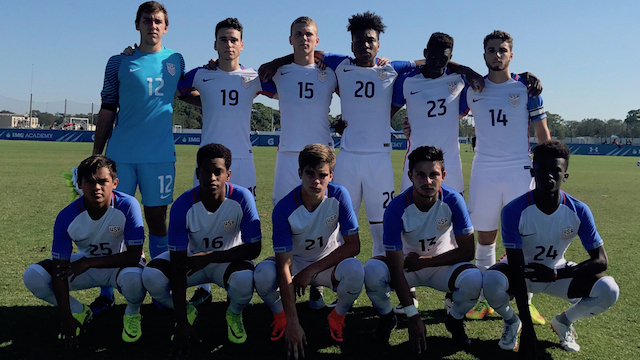 BRADENTON, Fla. -- The 2016 IMG Cup Boys Invitational began on Wednesday with six of the eight teams in competition. The U.S. U17 Men's National Team began the three-game slate with a 2-1 victory over Baltimore Armour 18DA. Tottenham FC rolled to an 8-0 rout of RVC Academy in the next contest before Deportivo Toluca FC beat IMG Academy 18DA 3-0 in the nightcap.

Baltimore Armour, which arrived to Bradenton late Tuesday night, began the morning contest against the U.S. Under-17 team by taking an early 1-0 lead when midfielder Stephen Nichols gathered a crossing pass from Avionne Flanagan just outside the box and rifled a shot past goalkeeper Alexander Budnik.

The U.S. team came right back, though, a short time later when Tonny Temple maneuvered past the defense after receiving a through pass from Carlo Ritaccio and easily placed a shot past Baltimore keeper Petr Janda.

"We kind of were awaken by their goal and we decided to push players forward with a more attacking style," U.S. attacker Isaac Angking said. "That changed the tone of the game."

After the two teams went into halftime tied at 1-1, Angking gave the U.S. team a lead that would stand when he gathered a loose ball near the top of the penalty box, dribbled past a defender and flicked a shot past Janda.

"Their athleticism and their depth eventually caught up with us," said Baltimore coach Santino Quaranta. "We had a couple mistakes and had some players out of alignment and it cost us. When you do that against the type of quality they have, then it's tough to beat a team like that. We just need to learn from those mistakes. Overall, though, I think we battled and played a solid match, all things considered."

Ritaccio said the difference in the game was in that their team focused more on having midfielders make runs in the second half.

"The key for us is to use our speed and our athleticism mixed with our skill to wear opponents down," Ritaccio said. "We have to do that from the start, though, to be more effective."