Impact defeat Sounders U18 3-0, onto semis 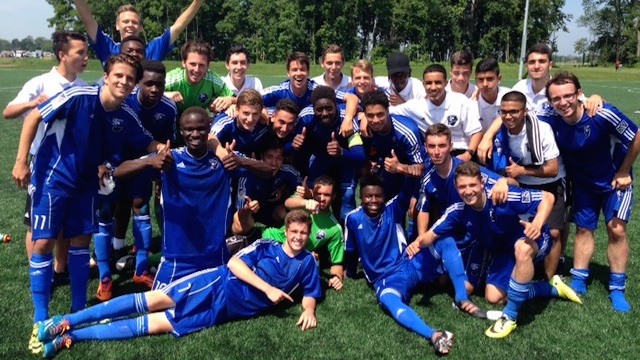 TUKWILA, Washington - The partisan pro-Sounders crowd at Starfire’s main stadium was teeming with life on Monday, booming out chants and actively engaging in bleachers that have rarely, if ever, been this packed for an academy match.

The Impact made sure it hardly mattered in the end. Playing in front of several hundred boisterous Sounders fans, the Montreal Impact were too disciplined, too efficient and ultimately too good. In only its second year in existence, the Impact is sending its U18 side to the final four.

Despite conceding the lion’s share of possession, the Impact made good use of its chances and defeated the Sounders U18s 3-0 in the Development Academy quarterfinal knockout stage. After a group-formatted playoff round in Indiana last month, the Impact were the last to get through the quarterfinal stage to set the field for the U18 final four in Carson, California later this month. PDA, FC Dallas and Bethesda-Olney are the other three challengers.

On balance, Montreal can’t be ignored as candidates to win its first Development Academy title. The Impact escaped a playoff group that featured the talent-rich L.A. Galaxy in June, and mowing through the Sounders in their own back yard will serve notice to the rest of the field in Los Angeles later this month.

The Impact academy was only founded in time for the 2012-13 season, and the U18s missed the playoffs with a losing record last year. A season later, Montreal finished third in the Northeast Division and is the only side left in the field to finish outside the top 10 in the Development Academy during the regular season.

From out of the playoffs to a title contender in a year. The Impact have already had quite a ride.

“Fantastic for the Sounders to get a crowd like this,” Impact U18 coach Jason Di Tullio said. “We’re not used to this. Last year was a year where we put principles in place. We continued working on it, we believed in it and it works.”

The Sounders pressed hard from the opening gun, leaning primarily on the speed of target striker Satoshi Chaffin and the guile of attacking midfielder David Olsen to unlock the pesky Impact back line. But even as the Sounders zealously hogged possession and pushed hard on the Impact defense, it never faltered. The Impact back line was sturdy, with fullbacks Mitchel Bringolf and Aron Mkungilwa holding down the flanks, lanky keeper David Paulmin patrolling between the pipes and center back Mele Temguia providing the defensive cornerstone. The Sounders never could pick the lock.

That opened the door for the Impact’s first, which came deeply against the run of play from midfielder Marco Dominguez, who powered home a blast inside the near corner to beat Paul Christensen for a 1-0 edge in the 33rd minute. The boisterous crowd was almost as stunned as the previously dominant Sounders. They’d have to play the rest of the game from the back foot.

“We knew that Seattle was going to come out flying,” Di Tullio said. “But we’ve worked on it all year that no matter what happens, sticking to the game plan because we believe in what we do. We believe in what the Montreal Impact is all about, and it’s allowed us to be successful and win games.”

The Impact took that lead into halftime, and despite redoubled effort from the Sounders, the Impact bagged another in the 53rd when leading scorer Fabio Morelli whipped off a mazy run and finished in the opposite corner past a diving Christensen to double the advantage. Sounders coach Dick McCormick subbed on attackers Adeseyi Adekoya and Victor Mansaray late, but to no avail. The Impact cleared off every attack.

They added a final exclamation point in the first minute of stoppage time when late sub Samuel Duffek tapped in a short-range effort to make the outcome certain. The Impact are headed to L.A., and they go with every expectation of winning a trophy.

The Sounders-Impact meeting was only one in a round of four nation-wide knockout matches that decided the national fates of the final four that convenes in Los Angeles later this month. Earlier in the day, FC Dallas, PDA and Bethesda-Olney each punched tickets to the show.

FC Dallas’ 3-2 victory over the Colorado Rush was undoubtedly the most heart-stopping of the trio. In Dallas, FCD took a 2-0 lead into the final half hour on goals from Santiago Agudelo and Antonio Aguilar, but the Rush controversially clawed their way back into the game with two successfully taken penalties in the span of 10 minutes. The game wound into extra time when Agudelo popped up with a dramatic game-winner in the 94th minute.

Maryland club Bethesda-Olney continued its charmed season by popping up with a pair of goals in extra time to down Chivas USA 2-0. After a scoreless regulation, Jake Rozhansky broke the deadlock in the 95th minute with a goal from 22 yards. That was enough, but Daniel Kaiser added a final exclamation point with a goal in the 105th to push the highest scoring club in the academy into the semifinals.

PDA’s matchup was perhaps the most unenviable. Shattuck-St. Mary’s came through the group stage after downing 2013 national champ New York Red Bulls, and the Minnesota club was the only non-MLS club to make the final eight in each of the past two seasons. PDA brushed that aside by taking a 2-0 lead, weathering a goal to cut it in half and then adding the capper for a 3-1 victory to move onto the final four.