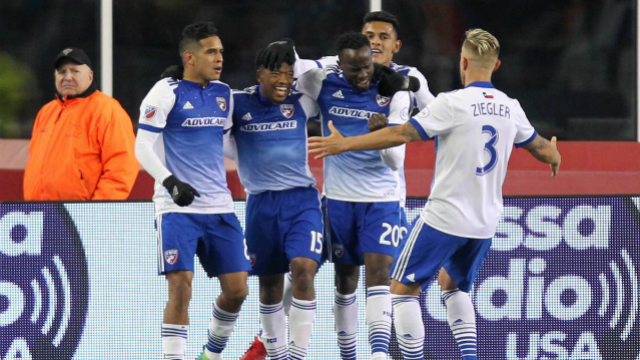 For long stretches of his career, whether at the club or college level, Jacori Hayes has been overlooked.

Unable to become a regular for any U.S. youth national team as a standout performer for the Baltimore Bays, he finally earned his due as a senior in college, garnering All-American honors as Wake Forest finished as national runners up in 2016.

However, opportunity knocked at the start of 2018, with Kellyn Acosta suffering a sports hernia injury during a Concacaf Champions League quarterfinal match in February. Hayes has stepped up in a big way for FC Dallas in his second season, punctuated over the weekend by another strong performance where the Maryland native scored the lone goal in a 1-0 win over the New England Revolution.

Watching Hayes play in college, it was always clear he has special talent in central midfield. When it came to making his MLS transition, demonstrating the ability to compete physically against bigger, faster players was a big question. Through his first five appearances, Hayes has shown that he can compete – and then some. His performance in central midfield was particularly notable against the Revolution, per his Opta chart below. He made 13 ball recoveries (orange), five successful tackles (green), one clearance (purple) and two successful interceptions (blue). The midfielder completed 27 of his 35 pass attempts as well.

Even before taking into account his contribution on the score sheet, it was another positive shift from Hayes. However, his second half winner shows what he does well. With both FC Dallas and New England Revolution players static during this sequence, he makes a simple near post run, using his weaker foot to beat New England’s Matt Turner to win the game.

⚽️ Watch it on repeat: @JacoriHayes scores his first @MLS goal to push FC Dallas to a 1-0 win on the road in New England. #ChallengeAll pic.twitter.com/5FtPOglwp0

Going forward, his future in the FC Dallas starting lineup is something to watch for. With Acosta soon to return, Hayes is in the kind of form that dropping to the bench would be a cruel fate. Supplanting Carlos Gruezo in the lineup isn’t out of the question, though the answers won’t come until Acosta is back and FCD tips its hand.

After a relatively decent rookie season, the start of 2018 has been rough for Jackson Yueill under new head coach Mikael Stahre.

Yueill’s hard work on the training field finally paid off over the weekend, as the former UCLA midfielder earned his first start of the new campaign. He rewarded his head coach with a solid stint over 90 minutes, including an assist on the game’s opening goal.

That's one way to endear yourself to the Avaya Stadium faithful. ⚫️🔵 @ErikssonMange7's first at home was a beaut. #WeAreSanJose pic.twitter.com/thar34YIm3

It’s a simple cutback and teammate Magnus Eriksson does the rest with a nice finish outside the box, but the accomplishment is nice for Yueill after a sluggish start.

Now, just to get Tommy Thompson on the field.

All Brian White does is score

Making the Red Bulls roster was always going to be a tough challenge for Brian White, after New York picked him in the first round of the 2018 draft.

A standout last summer on the Red Bulls U23s during the PDL season, White was obviously familiar to the Red Bull technical staff. And while he was unable to carve out a spot on the MLS roster, White’s jumped at the chance to start his pro career for Red Bulls II. With two goals over the weekend, White is up to four goals from his first five games in USL.

Heading into the draft, the Duke star was recognized as an accomplished goal scorer without a clear position in MLS. Lucky for him, he’s landed in a spot where he has to start from the USL, but so far, so good, as Red Bulls II appears to be an ideal fit for him.

Under-the-radar Rookie of the Year candidate Christopher Mueller made it two goals in two games, scoring in a 2-0 win against the Philadelphia Union over the weekend.

It required a fortuitous bounce and defensive miscommunication, but Mueller’s nicely-taken finish is certainly going to give him another boost in the eyes of head coach Jason Kreis. He threw in a Cristiano Ronaldo-esque celebration to boot.

Why you never quit on a play. 👇 pic.twitter.com/AhjYD18LmU

A continued benefit of the MLS-run USL sides is the chance for amateurs to jump into the pro ranks without sacrificing college eligibility.

Another rising star took the field last week, with Real Salt Lake midfielder Richard Ledezma making his pro debut for the RSL Monarchs in a 3-2 win against Seattle Sounders 2 on April 11. Ledezma is obviously a key player in the RSL Academy, who earned a call-up to the recent U.S. U20 MNT trip to Europe in March.

Could his involvement be a sign of things to come with regards to a pro contract? It’s too soon to tell, though Ledezma is certainly a name to watch out west.