We’re back with this week’s edition of commitment announcements. Today we focus on the boys; tomorrow, we’ll review the girls.

Back on February 18, Chicago Fire midfielder Drew Conner gave us a little insight into the school’s he was considering for the 2012 season. A few weeks later, Conner has come to a conclusion on that list, choosing Wisconsin as his college destination.

Conner, our No. 30 ranked player in his 2012 class, is a top prospect who is currently tied for the team lead in goals scored for his Fire squad of the Development Academy. But his accomplishments haven’t tempered his desire to develop further, and his decision to join the Badgers in a year is based on their environment for growth.

“Wisconsin has great academics, a rising program and a coaching staff that can help me take my game to the next level,” Conner said. 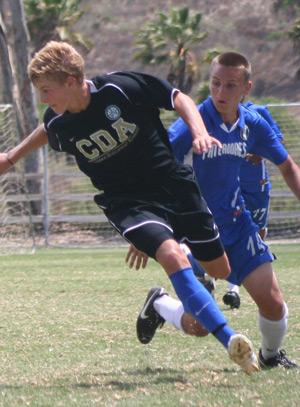 Matthew LaGrassa
In other news, Nicholas Williams (CASL) has committed to North Carolina for the 2012 season. It’s an exciting development for Williams, who will not only join a premier program but will stay local. Williams is a tough defender for CASL.

Jameson Lochhead (Match Fit Chelsea) has committed to Brown for 2012. Lochhead, a defender, is our sixth ranked player in the New Jersey Region. He’s a captain of his Development Academy squad and a tremendous student.

Jake Weiss (Team Boca) has committed to UCF for 2011. The Florida defender will stay local.

Matthew LaGrassa (California Development Academy) has committed to Cal Poly for 2011. LaGrassa is a strong goal-scorer who is the 12th ranked player in the Northern California & Hawaii Region.

Leonard Ayala (Houston Dynamo) has committed to UCF for 2011, joining Weiss. Ayala is also a defender.

Nicholas Bramall (Soccer Plus Academy), a defender, has committed to Marist for 2011.