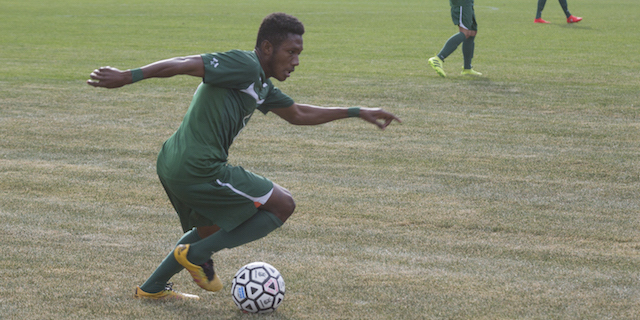 For an hour-and-a-half, Michael Tahiru and coach Kurt Swanbeck sat in a car discussing the pros and cons of Tahiru's most recent offer.

Twenty-four hours later, the high-scoring Class of 2018 prospect from Ghana had made a choice: Lehigh.

Swanbeck confirmed that Tahiru, who scored 35 goals while helping Hebron Academy (Maine) to an 18-0 season and a NEPSAC Class C title, selected the Patriot League program that is in need of more offense.

Tahiru is from Accra, Ghana, and has competed with the country's Under-17 National Team.

He was one of three players from Ghana who were interested in Hebron Academy through a contact with Swanbeck, but the only one who ended up at the prep school in Maine. He arrived at the tail end of the 2015 season, and he had a breakout year in 2016. Hebron Academy, which had never even reached a NEPSAC final, went 18-0, scored 97 goals and won the NEPSAC crown. Tahiru netted the championship winner in a 1-0 decision over Master's.

Tahiru is the third Class of 2018 verbal to Lehigh, joining Josh Luchini and Justin Scharf.