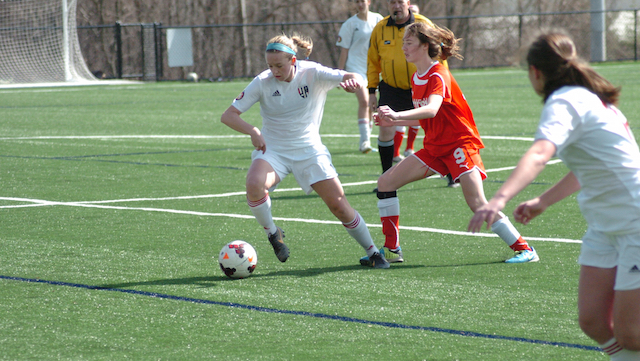 Manzo scored four goals in Vardar’s final two matches of the season, including a hat trick in a win over the postseason-bound Chicago Magic, while Loving scored two goals to help FC Bucks hand PDA’s vaunted U17 side its first loss of the season on the eve of the ECNL playoffs.

For the Vardar U16 team, the season won’t go any further than last weekend. Despite a couple solid results and a plus-.500 record at 12-11-4, Vardar finished five points out of the Mid-America Division’s final playoff spot to miss the postseason. Vardar’s guiding attacking hand all season was Vincent Manzo, a quick-fire striker with the ability to heat up in a second. Vardar closed out its season with a 4-2 win over playoff-bound Chicago Magic and a 3-2 loss to the Chicago Fire a day later, and Manzo couldn’t be contained. He scored a hat trick against the Magic, including three of the game’s first four goals to stake Varder to a 3-1 lead it didn’t need much help holding. While Varder dropped its finale, Manzo evened terms at 2-2 with a rasping strike in 67th minute before the Fire bagged the winner a minute later. Manzo finished the season with a team-leading 14 goals from just 18 matches.

While PDA has always been a program on the move, its last couple years in the ECNL have been particularly dominant. PDA’s U17 team was no exception this year. Headed into the last day of the regular season, PDA hadn’t lost a match, including a 3-1 win over Metro Division foes FC Bucks earlier in the season. While PDA had already clinched the division by the ECNL’s final weekend, it could lock up an unbeaten regular season with a win over FC Bucks and head into the playoffs boosted by that momentum. Emma Loving and FC Bucks had other ideas. Loving led FC Bucks with a huge two-goal performance over the weekend en route to a shocking 3-2 victory over PDA. Now FC Bucks is headed to the postseason with more momentum than ever.