MLS Next Fest Preview: First of a kind 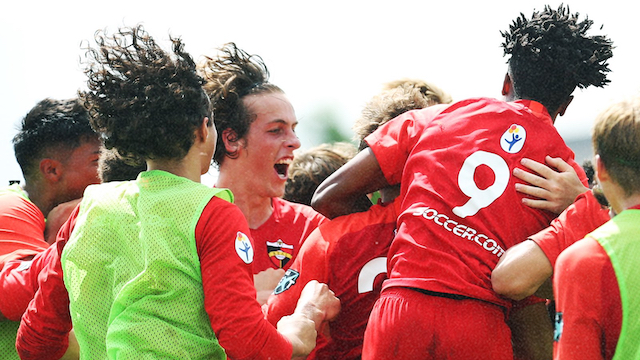 A lot in club soccer has changed since the last time MLS academy teams were involved in a winter showcase. In 2019, U.S. Soccer ran the club soccer league and the event was hosted in Bradenton, Florida with the attached Nike Friendlies - a youth international event that featured a number of players who are currently starring at the professional level.

On Friday, MLS Next returns the tradition of a winter showcase for boy academy teams when the MLS Next Fest Showcase kicks off from Silverlakes Complex in Norco, California.

When U.S. Soccer abruptly shut down the youth league, there were plenty of questions about what would come next. Some clubs splintered off and joined Boys ECNL, which is also having a showcase event this weekend in South Carolina. However, many of the clubs joined the newly formed MLS Next.

Compared to U.S. Soccer’s Development Academy, MLS Next is a different ideology for youth development. The federation’s investment into the youth game presented a target of improving the player pool for the youth and full national teams. MLS Next’s ambition is to get the best players into a professional environment and into the first team in the domestic league.

The winter showcase features a couple of elements to highlight the differing goals between the past and the current. For instance, MLS Next Fest will feature two games for the top players from non-MLS academies on Saturday and Sunday - a scouting event for the MLS academies in attendance to see the best compete against the best.

From Friday to Tuesday, the clubs of MLS Next will be in action in Southern California with the U15-U19 age groups taking part in the event. TopDrawerSoccer will be on hand for the event. Check back on the site and on our instagram throughout the event for exclusive coverage from the fields.

The MLS Academy teams are in the Generation Adidas qualifying event. Chicago Fire leads this age group in points this season with 39 points from 15 games. Fire takes on Sporting KC, San Jose Earthquakes, and DC United in Group A.

Austin FC leads this age group in points per game with 2.64. Joah Reyna, the son of Claudio Reyna and Danielle Egan and the brother of Giovanni Reyna, is the noteworthy name on the Austin roster. Austin has some local ties on the roster too. Oliver Holt, Finley O’Mahoney, and Kian Concepcion are all from Southern California. Austin takes on Philadelphia Union, Real Salt Lake, and Orlando City SC during the event. The opener against Union at 8 am on Friday could be the game of the event.

In the Showcase, Sockers looks like they were bumped into the MLS category as they are listed as the opponent for LAFC, FC Cincinnati, and New England Revolution. Sockers is 9-2-1 on the season.

Strikers FC is the top team in points per game in this age group. Strikers was placed in Group 3 with games against Southern Soccer Academy, South Florida Football Academy, and FC United Soccer Club.

Aiden Benitez and Indiana Fire Academy could be another team to watch at the event. Benitez, who already made his debut with Indy Eleven in USL, tends to play up an age group or three, but he is a 2007. Indiana faces off against LAUFA, PDA, and Miami Kendall Rush SC in Group 2.

The showcase game in the U15/16 age groups is Saturday night at 8 pm on Field #1. The MLS assigned scouts at the event will be the making the rosters for these events with the two teams listed Best of East and Best of West. It will draw a lot of eyeballs.

Atlanta United is one of the few MLS academies with a team in this age group group. Atlanta is in Group 1 with games against Cedar Stars Academy - Bergen, Miami Kendall Rush SC, and De Anza Force.

Total Futbol Academy had a stellar run during the MLS Next Playoffs last season in the 2006 age group. TFA takes on Southern Soccer Academy, FC Delco, and FC United Soccer Club during the event.

Group Five ended up with a trio of residential academies. Alexandria SA is the lone wolf of the group. The Virginia squad is going against Barca Residency Academy (AZ), Shattuck-St. Mary’s (MN), and IMG Academy (FL).

The 2005 age group is also a Generation Adidas qualifying event. Charlotte FC has been one of the top teams in this age group this season with a 6-0 record. Charlotte FC takes on Colorado Rapids, New England Revolution, and Houston Dynamo.

Philadelphia Union, a favorite in this age group, is in Group D with games against San Jose Earthquakes, Atlanta United FC, and Columbus Crew. The Crew season has been up and down but the team is in good form recently with a five-game unbeaten run in league play.

In the non-MLS group, RSL-AZ had a great start to the season. The squad takes on Hoover-Vestavia, PDA and IMG in Group 6. Those games kick off on Saturday, and should have plenty of eyes from the college soccer world on the fields.

Barca Residency Academy also has a strong squad in this age group. Barca will be tested with games against Cedar Stars Academy-Bergen, Indiana Fire Academy, and Weston from Group 3. Barca forward Moises Arciniega is one to watch in this group. He is a member of the U.S. U17 Men’s National Team player pool.

There is another selection game in the U19/U17 age groups. The game is Sunday night at 8 pm with the MLS staff on hand selecting the teams. The older game could be a great scouting tool for college coaches looking for unsigned players at this event.

MLS academies have mostly shutdown teams in this age group, as they prefer to push players onto their USL teams once they reach this age or encourage players to find another avenue in their development. Portland Timbers and New England Revolution are two of the clubs still with U19 teams. They are both in Group 3 along with Solar SC and Miami Kendall Rush SC in what should be a very competitive group. The action kicks on Saturday from Group 3.