Throughout the 2012 college season, TopDrawerSoccer.com will closely follow some of the top candidates likely to make a successful jump to the pro ranks -- whether in MLS or elsewhere -- and track them on a weekly basis.

Here’s a look at some of the top performances from seniors and potential Generation adidas candidates over the past week:

MF Jose Altamirano, San Diego State: Started both of San Diego State’s games in Indiana over the weekend. He did not put his name on the scoreboard, but was solid overall in the midfield.

MF Carlos Alvarez, Connecticut: The attacking midfielder started and played every minute of Connecticut’s two wins over the weekend.

F Will Bates, Virginia: The hulking forward returned after sitting out the opening game with an injury, appearing in both of Virginia’s games last weekend from off the bench, notching an assist in their 2-1 win against California. 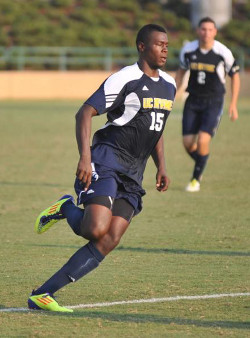 MF Kyle Bekker, Boston College: Was in the starting lineup for both games over the weekend, as BC defeated Fairfield 1-0 and lost 1-0 to Boston University.

GK James Belshaw, Duke: As expected, Belshaw was in goal for all 180 minutes of Duke’s games, although couldn’t keep a shutout in either. Compiled a total of six saves across those two games.

F Ashton Bennett, Coastal Carolina: The speedster bagged another goal over the Labor Day weekend, taking his total to three so far on the year. At this point, he’s accounted for half his team’s offense.

MF Jack Bennett, St. John’s: The midfielder’s impressive start to the season continued, as he scored a goal and notched an assist in 180 minutes.

F Julian Cardona, Penn State: Not a great weekend for Cardona. He hit the post against Duquesne and then was stopped on a breakaway by the keeper against Georgetown.

D Greg Cochrane, Louisville: Grabbed two more starts at left back as Louisville won its first game of the season over Belmont. Although the team did lose 1-0 on Tuesday night against Saint Louis.

MF Machael David, UC Santa Barbara: Still struggled to adapt to his role in the Gauchos midfield, but showed a better instinct offensively with some cutting runs against Oregon State on Friday.

MF Paolo DelPiccolo, Louisville: The industrious midfielder started both of Louisville’s games over the past week.

F Ryan Finley, Notre Dame: Scored twice against San Diego State in a 3-2 Notre Dame win on Friday then added an assist on Sunday in a 2-1 win over Clemson on Sunday. Finley is up to three goals and one assist on the year even though he has yet to start a game.

MF Jose Gomez, Creighton: The creative attacker for the Blue Jays notched an assist in a 1-1 draw against Akron and bagged a nice goal in a 3-0 win against Rutgers.

D Brock Granger, Louisville: As expected, was a starter in both games along Louisville’s back line.

D Taylor Kemp, Maryland: After starting in the 2-2 draw against UCLA, Kemp sat out the team’s 6-0 win against California.

D Kory Kindle, CSU Bakersfield: The outside back continues to show well early in the season, but the stats do not back up the play. Kindle has been flying down the flank and whipping in crosses, but the Roadrunners have not been able to get on the end of them yet.

M Jonathan Mendoza, Stetson: The Mad Hatters (0-3-0) are struggling and Mendoza might get lost in the shuffle. He has started every game, but has yet to break the seal in goals or assists.

D Jimmy Nealis, Georgetown: The left back started both games for the Hoyas in a pair of wins, and was named the Big East Defender of the Week.

GK Michael O’Keeffe, Fairfield: The shot-stopper played two games in goal as the Stags opened their season with a win and a loss. O’Keeffe made an impressive 10 saves in 180 minutes.

MF Leston Paul, South Florida: Quiet weekend for Paul with no goals or assists after the outburst to start the year.

D Everett Pitts, UC Irvine: One goal conceded in three games? That’ll do. Next up is a big test against Stanford and UCLA for Pitts and the rest of the Irvine defense.

MF Dillon Powers, Notre Dame: Nabbed the game-winner on Sunday against Clemson for his first goal of the season. Tough test for Powers this weekend with Akron and Oregon State visiting South Bend.

MF Andrew Ribeiro, Creighton: The midfielder played all 200 minutes of Creighton’s two games over the past week.

MF Nik Robson, New Mexico: Can Robson be effective in limited minutes? MLS scouts are about to find out the answer because the New Zealander is going to lose some playing time with the return of James Rogers to the Lobos this weekend.

F Devon Sandoval, New Mexico: The target striker collected MPSF Player of the Week honors for another strong weekend of play. Sandoval is consistently showing he has the toughness for the next level.

D Eric Schoenle, West Virginia: The center back started and logged 90 minutes each in a pair of 1-0 losses to ACC foes Wake Forest and North Carolina.

F Blake Smith, New Mexico: The speedy forward had a goal and an assist over the weekend for the Lobos.

MF John Stertzer, Maryland: The ever reliable midfielder scored two goals over the weekend, one from the penalty spot, to take his season tally on the year to three as the Terps went unbeaten against West Coast opposition.

F Emery Welshman, Oregon State: The Canadian has been in the shadows of Khiry Shelton early in the season, as the Beavers establish an identity of a counterattacking squad.

F Paul Wyatt, James Madison: In two games over last weekend, Wyatt got on the scoresheet twice in a 6-1 defeat of St. Bonaventure. Couldn’t provide an offensive lift on Sunday as James Madison drew Temple 0-0 on Sunday.