SAN ANTONIO - The winds died down, and the sky was a patented Texas blue as 110 girls teams wrapped up the ECNL San Antonio Showcase Sunday at STAR Soccer Complex.

Mustang led 1-0 at halftime, following a goal by Ryan Walker after a free kick. Stephanie Amack turned the ball to Walker, who fired it toward the back post. Walker would play a key part in the second half, as she was also credited with an assist to Tyler Cunningham's goal.

"We worked really hard together," Walker said. "We wanted to win, because it's a rivalry. They beat us last year at the Las Vegas ECNL. As a team, we have been preparing for this game for a while.” 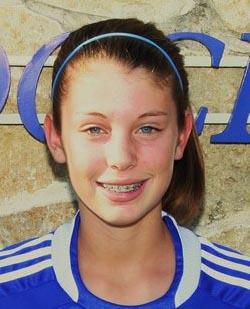 Mustang coach Neil McGuire, who also coaches the California Golden Bears, had the highest respect for the opposing team.

"Both teams are very talented, "McGuire said.  “We were looking for any opportunity. We were fortunate that some of the opportunities came our way."

Miranda Larkin was the first-half goalkeeper for the Dallas Sting, and faced most of the Mustang shots. Marleigh Essler played in the second half. Forward Caity Heap, who has committed to Texas Tech was an effective player, as was midfielder Kendall McKnight (headed to Oklahoma State). Midfielder/forward Madeline Lundberg also had a strong presence on the field.

"Over the weekend we struggled creating a lot of chances," said coach Andrew Kummer. " I thought today we did a wonderful job, not only of trying to keep the ball, but getting forward, and getting it to the attacking third. We ended our attacks with a cross or a shot, and we were able to capitalize on that idea. "

Rush led 1-0 going into the intermission, on a goal by Cassandra Hanna, who will attend Regis College. Keelyn Arnold, also a future Regis player, gave her team a 2-0 lead with a goal in the second half.

A playmaker at midfield was Kelsey Loupee, who will attend Virginia Tech.

"When we find our forwards, and our midfielders connect," said Loupee, "that's when we are successful. We also played very well defensively today."

Annie Kunz, who will play for Texas A&M(w), was a major part of the Colorado Rush attack.

The DFeeters Chioma Ubogagu scored in the 77th minute of play. Ubogagu, originally from Nigeria, was a highly recruited player and will become a member of the Stanford Cardinal.

Sweeper Meghan Streight, a future Texas A&M(w) Aggie, helped keep her team in the match. Defender Alexandra Wurst played a major role in the back line. Wurst is headed for Central Arkansas.