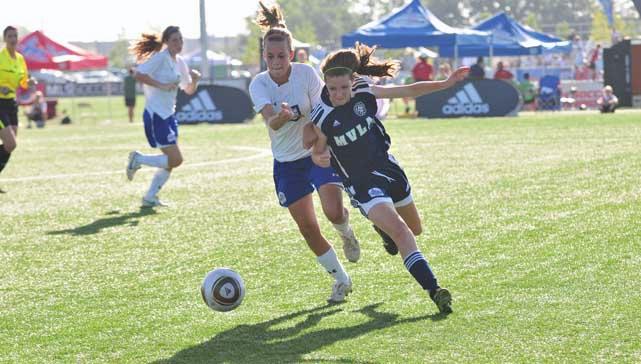 The Mountain View Los Altos (MVLA) Lightning won the 2010 US Youth Soccer under 14 girls National Championship on Saturday, July 24th at the Overland Park Soccer Complex, in Overland Park, Kansas.  Lightning began its quest for the national title in August of 2009 by winning numerous regional competitions, including the Far West Regional Championships in June 2010, attended by state champions from the 14 Western US states. The four regional champions competed in round robin group play, from July 21st - July 23rd.  The top two teams then faced one another, with Lightning taking home the national title and etching its name onto the coveted Elmer Ehlers Cup.

For the championship game, the setting could not have been more dramatic as thunder and lightning rolled through Overland Park, Kansas, delaying the start of the game by almost two hours. Lightning and the Dallas Sting 96 (South Regional Champion) teams entered the match after facing each other during group play, where Sting handed Lightning its first loss since the Cal-North State Cup finals.  Both teams had their scoring opportunities during the match, but the match remained scoreless through regulation (70 minutes) and two overtime periods (20 minutes). The championship came down to penalty kicks. With lightning flashing in the distance, Lightning’s keeper stopped the first shot by Sting and all five of Lightning's shooters converted their kicks.  Lightning prevailed 5-3 in the penalty shoot out. 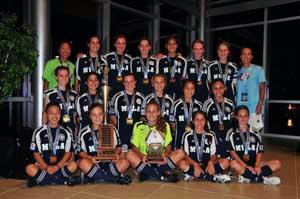 MVLA Lightening with their trophy.
In the 75 year history of the USYS National Championships, only one other MVLA team has won a national title, the under 19 boys MVLA Shooting Stars in 1993.

Coach Erin Montoya was ecstatic about the victory, stating, “This was a great win not only for Lightning but for our MVLA club as it is the first girls national championship in club history. Sting is a well-coached team and had a terrific tournament. The championship game was an amazing atmosphere with our fellow Cal-North supporters cheering us on and pumping up the girls."

Montoya further expressed, “My team was outstanding all week and I'm very proud of all 17 players who contributed to our success not only here in Kansas but for the entire championship series. Lightning's depth is what I feel contributed most to our success this season. They all worked extremely hard and should be excited about their accomplishments.”

Lightning’s road to the championship began over twelve months ago, playing in the highly competitive Far West Regional League (Champion), Cal-North State Cup (Finalist), Far West Regional Championships (Champion). They faced some of the top talent in the country, with a combined record in those events of 22-2-1 and scoring a total of 65 goals and allowing only 7.