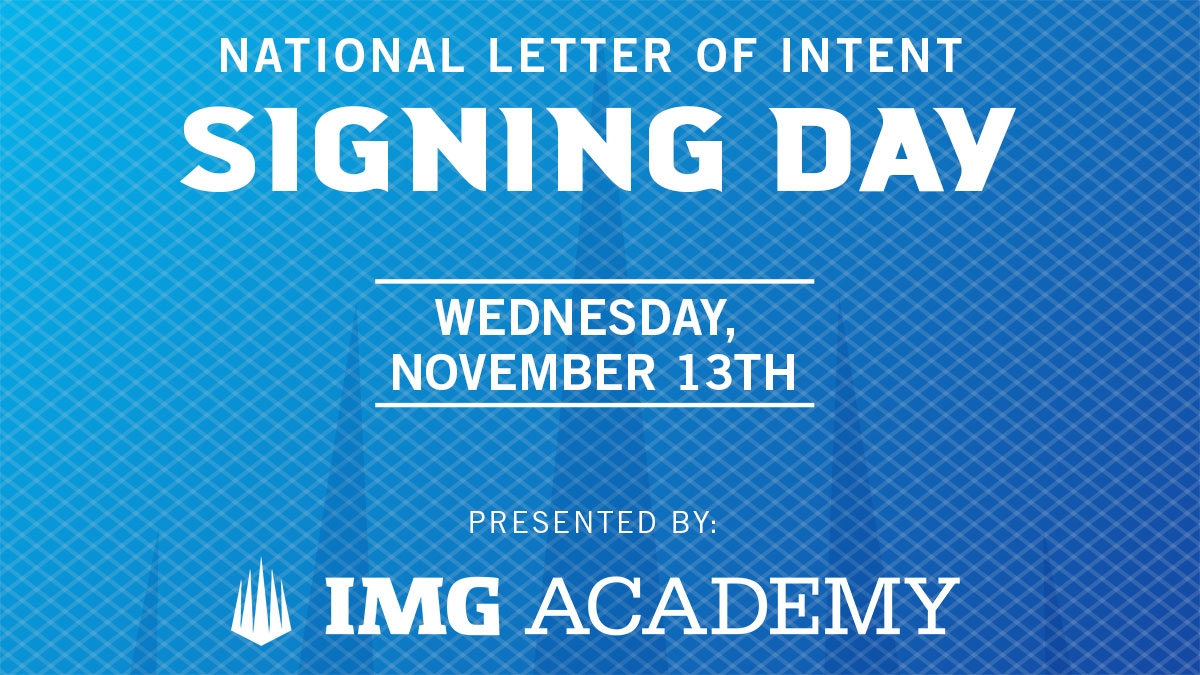 The signing period for the class of 2020 opens on Wednesday, November 13.

As usual, TopDrawerSoccer.com will be providing coverage for this year, starting on Wednesday and running well into 2020.

There will be the usual live updates on Wednesday and beyond, along with a National Letter of Intent Signing Day photo gallery.

Looking to get involved? Email any photos to editor@topdrawersoccer.com. The photo gallery will be updated throughout the fall, winter and spring, as signing day is observed at different schools around the country. Bookmark this page, as it will host the live blog this coming Wednesday.

10 a.m. -- It's National Signing Day for football, the final opening day for the class of 2020. Some soccer teams and players are getting in on the action with their high schools, as seen below. Make sure to scroll down, or even get involved! It's not too late. Send us any photos to editor@topdrawersoccer.com if you haven't already.

11 a.m. -- We may be a week after Signing Day, but very interesting news has surfaced around a U17 veteran and top recruit. Nicolas Carrera has been announced as part of Louisville's 2020 recruiting class. He played at the World Cup in Brazil, and while it may be a stretch to suggest he'll make it to campus, it's certainly notable.

9 a.m. -- Updates will be sporadic in the coming weeks and months, but there is plenty of coverage still to come with the signing window now open. IMG Academy's soccer recruits can all be spotted in this handy Instagram post, as they send 2020 graduates to programs around the country.

9:30 a.m. -- Ranked as the No. 1 recruiting class in the most recent update, UCLA(w) began to announce some of its 2020 group late on Wednesday night via Twitter. Official are players such as Jordyn Gather, Kaila Novak, Mackenzee Vance and Jennifer Alvarado. Texas standout Jillian Martinez signed her NLI as well.

11:50 a.m. -- How about using the head coach's Twitter account to announce a recruit? That's what Cal Poly did on Thursday.

Proud to announce @CPMensSoccer signing of Alejandro Ramirez for the 2020 class. Top striker from Costa Rica having played for the Heredia academy program. Welcome to the @CPMustangs family. pic.twitter.com/rn2mrVoASk

7:45 p.m. -- One day after advancing to the Big East tournament final, Providence drops all of its Signing Day players into one tweet. Recruits from up and down the East Coast are slated to join the burgeoning program.

Congrats to our NLI signees! We’re excited to have you the program! #GoFriars

8 a.m. -- The signing window is officially open as the college soccer season winds towards the postseason. But that hasn't kept programs from already getting involved early on, as the South Carolina women's program, a No. 2 seed in the tournament, has already started announcing the class of 2020.

9 a.m. -- Don't forget to email us your Signing Day photos to editor@topdrawersoccer.com. The photo gallery will be launched soon. Meanwhile, follow us on Twitter to get live snippets and retweets throughout today.

9:50 a.m. -- International signings play a big role in recruiting these days. But with the early signing window, it's rare to see players confirmed this early on from abroad. But Colorado did announce the signing of Filippa Graneld, who will swap Sweden for Boulder.

10:15 a.m. -- FC Dallas continues to send players off to strong programs, whether it's men's or women's. U.S. youth national team veteran Samar Guidry will join Virginia with the class of 2020, as the No. 12 recruit in the class is a nice addition to the ACC side. Check out the full list of early signees here.

10:25 a.m. -- Staying in Texas, the Houston Dash Youth program has announced its 2020 recruits. A total of 12 players are heading off to programs around the country.

10:30 a.m. -- One of the most interesting players to watch as a freshman in 2020 and beyond is South Carolina forward Catherine Barry. Confirmed as part of the program's class of 2020, her success in 2017-18 and 2018-19 is notable: she scored 105 goals in 33 games. How that translates to her ability to score in Division I soccer is going to be fascinating. She's enjoyed success in high school as well, delivering 33 goals and 11 assists for Tabor Academy in high school soccer last fall. The Massachusetts native should bring instant offense, regardless.

11:15 a.m. -- As the ACC announces its men's soccer awards, most teams are focused on the ACC tournament semifinals kicking off later today. But Syracuse is rolling out a few recruits, and it will be interesting to see if any other programs follow suit before the day is out. DeAndre Kerr is a talented prospect out of the Toronto FC Academy, one of the rare players from there to head to the NCAAs.

Making that quick trip over the border is DeAndre Kerr. 🇨🇦

11:30 a.m. -- It's not a huge shock to see that one of the first recruits announced by West Virginia hails from Ontario. Maya Ladhani is the first of what could be several Canadians to head to Morgantown once again.

11:50 a.m. -- A Big Ten tournament is the goal on Friday for Penn State. But Jeff Cook has his new class coming out, which can be followed a this handy Twitter thread.

12:15 p.m. -- One of the first programs to officially reveal a press release is Bryant. Six Student Athletes are heading to the NEC program in 2020.

12:26 p.m. -- A rapidly-improving Indiana women's program recently wrapped up its first season under new head coach Erwin van Bennekom. Three players are set to join the team in January, which the program announced this morning.

Really excited to have Anna, Jen and Sofia join @IndianaWSOC this January! pic.twitter.com/IlyfwQyOcz

1 p.m. -- Clemson is sitting in the Top 10 in the most recent women's Division I recruiting rankings update, and has already confirmed a series of signees on its Twitter account. That includes Makenna Morris, ranked as the No. 11 recruit in the 2020 Girls IMG Academy Top 150, who was just announced.

1:20 p.m. -- Big Sky tournament runners up Eastern Washington became another program to officially put out a release, bringing in six new players from California and Washington. BYU, a No. 2 seed in the tournament, added five today.

1:40 p.m. -- Staying in the Pacific Northwest, Oregon is one of the programs looking for a new soccer coach after Kat Mertz resigned earlier in the week. That hasn't dissuaded at least one recruit, as Paige Alexander was announced as the program's first signee. During the past two seasons, Alexander commuted from Salem to Portland to compete for the Thorns Academy, but is back playing high school soccer in 2019-20.

2 p.m. -- Signing Day for soccer doesn't generally feature day-of decisions. But yesterday did see the No. 61 recruit in the 2020 Boys IMG Academy Top 150 make his choice. Atlanta United forward Daniel Mangarov committed to UNC Greensboro, which is in the Southern Conference tournament final this Sunday against Mercer. It's a nice boost for the program under first-year head coach Chris Rich.

2:30 p.m. -- Michigan State joined the ranks of programs that have put out an official release, with a seven-player class heading to East Lansing next year.

3:10 p.m. -- Youth clubs are generally on top of their game via social media on Signing Day. While pro teams such as FC Dallas and Houston Dash have already gotten a shout out, FC Virginia, Real Colorado, Crossfire Premier, WNY Flash and Tennessee SC are one of several club accounts to highlight their players.

3:30 p.m. -- Canadian youth national team players are a big part of Signing Day. Several players from the Whitecaps Academy are heading south to women's DI programs. And another Under-17 veteran, Leonie Portelance, will continue the Canadian pipeline at West Virginia.

3:45 p.m. -- Don't forget to send us your photos for the photo gallery, which is currently at around 60+ photos. Bookmark this page and that one, as it will receive updates over the coming weeks and months.

4 p.m. -- IUPUI women's soccer announced the addition of four players on its Twitter account as the afternoon hits. Best Signing Day photo so far? That goes to No. 3 recruit Talia DellaPeruta. The Georgia native is currently playing in Germany as a senior, and has a unique backdrop for her shot.

7 p.m. -- There are plenty of schools that have revealed their classes at this point so far. Pittsburgh (women), Texas, Mississippi State and Valparaiso women's soccer among others.