Comments
They committed; they signed, we covered it.

TopDrawerSoccer.com featured wall-to-wall coverage of National Signing Day, including a six-hour LIVE chat that tackled a wide range of topics. If you somehow managed to miss it, you can review the chat here.

In our look back at the biggest day in college recruiting, let’s review the big winners and reveal more commitments from some of our biggest stars.

And here are the results:

The UCLA women made out with seven of our 2011 Top 100 players, the most of any team in the country, including: Samantha Mewis, Kylie McCarthy, Sarah Killion, Abby Dahlkemper, Megan Oyster, Courtney Proctor and Caprice Dydasco. 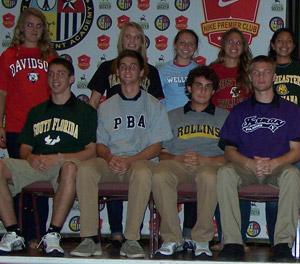 Clearwater Chargers players at their NLI signing ceremony.
Second on the list are Notre Dame and Stanford, which each have five Top 100 prospects from the 2011 class.

Not to be left out is Virginia, which lured the biggest addition of them all – No. 1 player Morgan Brian. She’ll be joined by standouts Olivia Brannon, Danielle Colaprico and Lia Bellizzi.

Texas A&M(w) is another winner, coming away with four players from the Top 100.

Who are your under the radar recruiters on the women’s side? How about UC Santa Barbara. The Gauchos have national prospects in Vania Robles, Miranda Cornejo and Indiana Mead.

Colgate, too, has a good class with Caroline Brawner and Jenna Gibney soon to join.

On the men’s side:

Despite finishing in a tie for second (behind Akron) in our chat audience poll asking who had the best incoming class, North Carolina has garnered the most Top 100 players with six. Jordan McCrary, Darvin Ebanks, Miguel Lopez, Ryan Dodson, Jon Ray and Cooper Vandermaas will all be donning the Carolina blue.

Duke and Virginia have four Top 100 players apiece while the Zips will have three in William Trapp, DeAndre Yedlin and Bryan Gallego.

The not-so-under-the-radar school that also boasts a strong group is Furman. With Kevin Pahl, Walker Zimmerman, George Fradenburg and Eric Steber all casting their lot with the Paladins, Furman can put its class against virtually anyone in the country.

Many clubs across the country submitted their signings including Clearwater, which had 20 players ink.

Cal Odyssey, which has established a strong reputation despite its modest size, had some quality signings that included stars like Isaiah Trejo, Villyan Bijev and J.P. Medina.

Birmingham United, De Anza Force and PDA were other notables.

And of course, we can’t leave you without a few recent commits. With many more sure to come, here are some new announcements.