New cycle begins for the U17 MNT 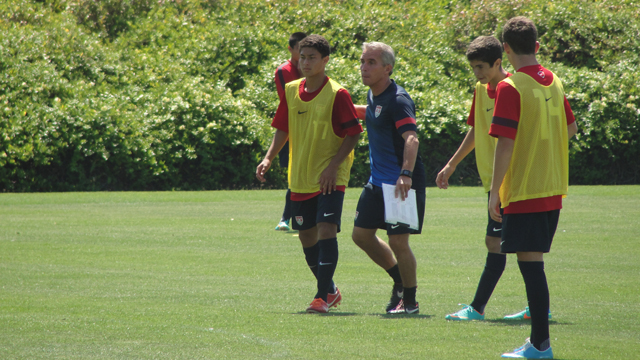 The U.S. U15 Boys National Team kicked off camp at the StubHub Center on Sunday, which marks the final camp for the 1998 age group under this age classification. The 98s are being transitioned into the next squad for the U17 World Cup cycle, which will take place in two years.

Camp this week holds a special meaning for those players that were called in, as this is the last chance to impress the coaching staff before the final invitations are sent out for the Residency Program, which will begin its fall semester from Bradenton, Florida in late August.

U17 MNT head coach Richie Williams will be leading this squad for the first time, but he already had a chance to coach a few of the top players in the age group earlier this month when Christian Pulisic, Joshua Perez, and Haji Wright were called in with the previous U17 MNT for a camp in Carson prior to the Niigata Tournament. Pulisic also made the roster for the trip to Japan.

Among the 44 players called in, U.S. Soccer Scouts identified nearly a dozen new players that will be looking to make up for lost time and carve out a spot over the course of the weeklong camp. Players like midfielder Ronald Escudero who has impressed with Pateadores in Southern California, and De Anza Force standouts Vernon Fernandez and Fernando Soria, who are both in their first youth national team camp.

The U17 MNT coaching staff also pulled in two players born in 1999, Tyler Adams and Edwin Lara, to fill out the group and contend for a spot in the Residency Program.

There is a sliver of good news for the fresh faces to this camp, as a few of the top players from this age group have already lined up opportunities over seas and thus bypassed the traditional Residency route.