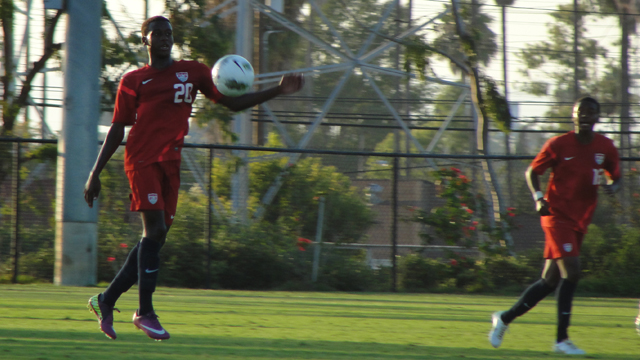 CARSON, Calif. – The U.S. U15 Boys National Team defeated the U16 academy teams from Real So Cal 4-1 and Chivas USA 2-1 on Tuesday in the first scrimmages from the September camp at the Home Depot Center.

U15 BNT head coach Tony Lepore made the goal of the camp abundantly clear after the games.

“A big part of it is player evaluation,” Lepore told TopDrawerSoccer.com after the games. “We are integrating a lot of new guys. There are 14 new players, which is exciting.”

For this camp, the U15 age group is replacing six regular members who made the Residency Program roster for this fall. That turnover opened up spots for a few players born in 1998 to play up with the 1997s at this camp. 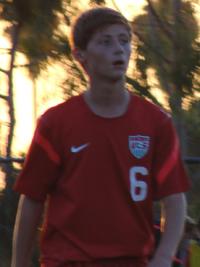 The youngsters acquitted themselves well to the level and made a difference during the scrimmages.

Nomads SC’s Joe Gallardo and Real Salt Lake – Arizona’s Sebastian Saucedo scored for the youth national as it overcame a 0-1 halftime deficit to top Chivas USA U16 2-1 in the second game of the day.

“In the second half, everything got a little bit better,” Lepore said. “There were guys who came into the game and brought good energy.”

Both Gallardo and Saucedo were second half substitutes.

Gallardo, one of the players born in 1998 who is playing up an age, was a spark plug at the striker position and helped facilitate the offense in the second half with his dynamic play.

The San Diego-native scored on a scissor kick after a corner kick bounced in the box about seven yards from goal. Gallardo pounced on the bounce and hammered it home for the tying-goal.

Late in the contest, Saucedo found the winner when Coy Craft (FC Dallas) hit a splendid diagonal ball through the defense and into the path of the midfielder. Saucedo finished around the keeper for the winner.

Chivas USA U16 grabbed the lead just before half when the U15 BNT defense failed to mark up on a corner kick and a Chivas USA attacker headed a cross into the far post for the opening goal.

“We play Chivas USA because they do a lot of things really well – whether it would be the pressing or the possession,” Lepore said. “It was a good experience. It was a good start to the week.”

The coach went on to talk about the change in the schedule for this camp. Normally, the scrimmages are held on Wednesday, but this camp moved up this first scrimmage to Tuesday, which contributed to some of the players still getting adjusted to playing with each other.

Chivas USA U16 held possession in the first half and created more chances. The U.S. U15 BNT struggled to find its way into the game at points. The team did bounce back in the second half and tried to dictate the tempo.

Defender Abuchi Obinwa (FC American Soccer Academy Orlando) left the game early with stomach pains. Lepore said he was going to be alright. George Braima (Columbus Soccer Academy) stepped in and did well at center back.

Chivas USA U16 was missing a handful of players who were playing with the youth national team but still showed well in the scrimmage. Head coach Mike Munoz used some young players at the end of the game including U14 BNT midfielder Charlie Wehan who continues to impress with his vision and activity in the middle of the pitch.

Chivas USA’s Alejandro Vergara scored twice and made life pretty miserable for an outside back, as the U15 BNT cruised to a 4-1 victory over Real So Cal in the first game of the night.

New York Red Bulls’ Malcolm Dixon opened the scoring in the 22nd minute when he was fed by a perfectly weighted through ball from New England Revolution’s Abdulkadir Haji.

Three minutes later, Vergara scored his first of the game when he had an easy tap-in at the far post to double the U15 BNT lead.

Halftime substitute Kyle Scott (Chelsea FC) made it 3-0 in the 54th minute when he touched the ball around the last defender and then smashed a shot in the bottom right corner.

Scott is the younger brother of U18 Men’s National Team midfielder Kristian Scott. Lepore said the U.S. has been monitoring Kyle for a while, and eager to bring him into this camp. The Scott brothers are dual citizens – U.S. and England.

Real So Cal cut the lead to two in the 65th minute when their striker ripped a shot from 18 yards out into the upper corner of the net.

The national team put the game back out of reach five minutes later when Scott played Vergara down the touchline and past his mark. Vergara cut in and drilled a shot inside the near post for the final goal of the game.

There were a number of players who did well against Real So Cal. Center midfielder Abdulkadir Haji was silky smooth on the ball and made easy work of the oppositions midfielders. Center back Erik Palmer-Brown showed a good ability to read the game and pick the right spots to step forward and intercept a pass. Malcom Dixon looked like a man amongst boys at times with his pace against a flat backline.

Martin Salas (FC Dallas) put in a full 80-minute shift at defensive mid and did well. He controlled the pace of the game and allowed the attacking midfielders to get forward into the attack.