With the New Year comes new initiatives. One in particular has changed the landscape of the South Region.

Effective on January 1, Tulsa Soccer Club has merged with Hurricane FC to form TSC Hurricane. This mega partnership will funnel much of the Oklahoma soccer talent to one club.

The change won’t likely be reflected in our South region TeamRank until the summer, but by looking at the current rankings you can get an idea of the impact it should have.

Hurricane FC 95 Shubert leads the U16 girls’ rankings, while Tulsa SC 94 Black and Tulsa 93 Red top the boys’ U17 and U18 rankings respectively. 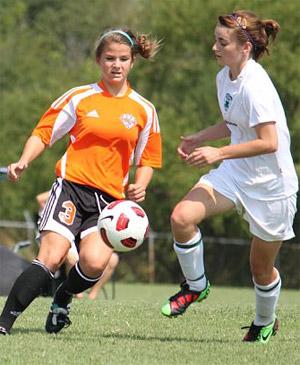 Hurricane FC (orange) has merged with Tulsa Soccer Club.
Among the stars coming through the ranks of each club is Kristen Killion, Cristian Mata, Quinn Starker, Darrien Chapman, Emily Hahn and Elizabeth Keester.

“One of the main objectives is to position us to be able to join ECNL and the USSF Development Academy,” said TSC Hurricane Executive Director Jim Tindell. “Each club (Tulsa and Hurricane) has been successful and in existence for 20 years. Combining the two brings together two thirds of state champions in Oklahoma. We’ll be very competitive and have a great deal of participation.

“The challenge for us now is making the operation process consistent. We have to finalize objectives and core values and create a common culture.”

That culture will likely include lots of winning.