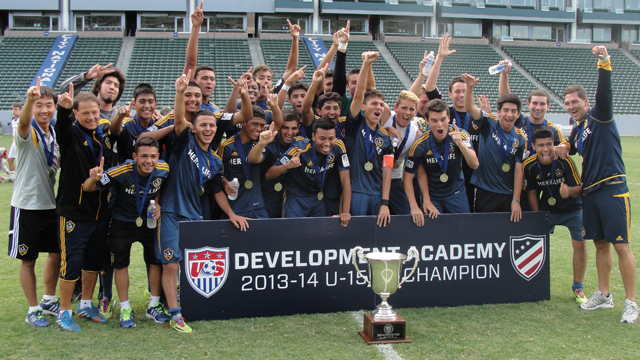 Smith’s inclusion marked the lone change to the Galaxy squad from the 11 that took the field against Chicago Magic PSG on Thursday in the semifinal.

“We knew we were going to have to play a little bit of a different style compared to [how we played versus] Chicago Magic,” LA Galaxy head coach Mike Munoz told TopDrawerSoccer. “It was going to be a little bit more counter-attacking oriented.”

Smith offered speed and a high work rate from the center forward position that frustrated the RSL defense all game.

“I’m a center forward. You have to be a little bit of a pain for the defenders and get in their heads so your team can get some momentum going forward,” Smith said with a laugh.

It worked out well for the striker midway through the first half when left back Alexander Ramos journeyed forward and crushed a shot off the post. Smith was in the right spot and directed the ball into the net with his knee.

Galaxy held the lead until halftime and then doubled the advantage shortly after the break. The sequence started when left winger Ethan Zubak was given too much space 18 yards from goal and decided to try his luck. Christian Hererra made a good save on Zubak’s effort, but conceded a corner kick.

Rey Ortiz’s delivery was only cleared to the penalty kick spot where Orozco was waiting for the clearance. The midfielder took one touch to his right and then smashed the ball into the back of the net.

“I knew there was going to be a rebound so I made my run,” Orozco said. “I’ve practiced that all season. It was my first goal of the season.”

Timing is everything in life and Orozco’s golden strike could not have come at a better time. The two-goal advantage allowed LA Galaxy to continue to pressure RSL at every turn and disrupt everything in the midfield.

“We had an idea of how they were going to play,” Orozco said. “We’ve played them before. They’re a good team. Our work ethic was great [today].”

Real Salt Lake’s potent attack never found a rhythm and Galaxy’s midfield did an excellent job of jumping into channels and cutting out passing lanes.

“We knew that if we denied entry balls to their key players that they were going to get frustrated,” Munoz said. “They’ve had their way this year for the most part. We were prepared in every little detail. We knew exactly what this game was going to look like and it played out that way.”

RSL had a couple of chances late to the cut the lead in half, but Bennett Sneddon’s diving save in the 72nd minute slowly started taking the air out of a comeback attempt bid.

Tate Schmitt and Miles Stray also had opportunities over the course of the final 10 minutes, but neither put a shot on frame.

In the U18 tilt, Bethesda-Olney had the early chances, but did not put any away, which came back to bite the squad, which advanced to the final in its first season in the Academy.

Star striker Jeremy Ebobisse Ebolo had the first chance of the game when a deflected cross floated to him inside the six-yard box. With over 30 goals to his name this season, smart money was on Ebolo tucking the chance away. However, PDA goalkeeper Joseph Ohaus made a great save and set the tone early.

Ohaus was called on again in the 22nd minute when Jake Rozhansky tried to beat him with a shot from the top of the 18-yard box. Ohaus made another save to keep it scoreless.

PDA’s best chance came with three minutes left in the half. Midfielder Anderson Asiedu stripped a Bethesda-Olney defender of the ball and then hit a cross to Brian White. The striker laid it off for Jared Stroud who ripped a shot off the post.

Bethesda-Olney answered with the final attacking movement of the first half when Sam Schmidt broke free down the left side and had a free channel to goal. Schmidt never got his hips around on the shot, and he missed wide of the far post.

PDA made some tactical adjustments at half to clean up the center of the field and reexamine the approach.

“We talked about how we were pressing high and how it worked while we had fresh legs, but once we lost fresh legs they were finding it much easier in the midfielder,” PDA Technical Director Gerry McKeown told TopDrawerSoccer about the halftime adjustments. “So we dropped a guy into the center to handle that and we had our center forward press on the two center backs instead of having a midfielder join him up there.”

Depending on center forward Brian White to do the pressing paid off for PDA, as the Duke-bound striker capitalize on a series of errors from the Bethesda-Olney defense for the opening goal.

Bethesda-Olney gave away possession at the top of its defensive 18-yard box. The ball squirted around and headed toward goal, but miscommunication between the goalkeeper and center back resulted in no one taking care of the ball, which landed on the feet of White for the easy finish.

“It means the world,” White said about scoring. “PDA has been my second home. I’ve been here forever. It means everything to me to score the game-winner tonight.”

PDA doubled the lead in the 70th minute on another breakdown of the Bethesda-Olney defense. This time, it was White’s ingenuity that created the chance.

“I was laying the ball off a lot and I just decided to go at them,” White said. “I realized that RP [Ryan Peterson] was coming in on the wing and I played it out to him and he finished.”

Bethesda-Olney’s best chance of the second half came with nine minutes left when Ebolo was handed a lifeline thanks to a pass that squeezed under the foot of a PDA defender. Alone on goal, Ebolo tried to skated around Ohaus, but the goalkeeper was better on the play and the day. Ohaus took the ball off his foot and cleared it from danger.

PDA nearly added to the lead late with James Murphy and Conlan Kemmerer both having good looks on goal, but neither found the back of the net.

With the final whistle, PDA celebrated the first Development Academy title in the club’s history.

“It was the personality of the group," McKeown said about what made this team special. “A bunch of kids who really loved each other, respected each other, fought for each other, sometimes fought with each other, and they really won for all the right reasons. In terms of personality, this is one of the strongest teams PDA has ever had.”

While PDA as a club enjoyed new territory, Ohaus was making history of his own as the first player to win a Development Academy National Championship three times. He was a member of the New York Red Bulls teams that won the U16 title in 2011-12 and U18 title in 2012-13.

“It means so much to me to win it [this time],” Ohaus said. “There is no other group of guys that I’d want to win it with.”

Ohaus’ third trip in the title game was the first time he played in the game after serving as a reserve previously. The club switch worked out for him and worked out nicely for PDA, which lifted the hardware thanks to his consistent play in goal throughout the playoff run.