PDP Part One: Players go for it in Toledo 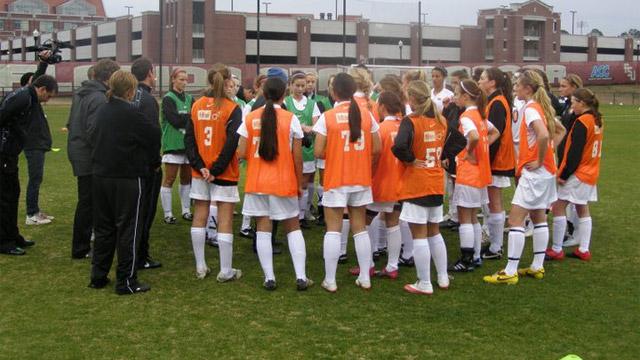 TOLEDO, OHIO – If the weekend’s event here is any indication, the ECNL Premier Development Program matches being held nationwide will be goal-scoring bonanzas.

The gathering, one of 10 going on nationally this spring as ECNL launches its Player ID program, featured 53 players from five clubs (Ohio Elite, Ohio Premier, Vardar, Michigan Hawks and Carmel United), spread out over four age groups. Games were played on Friday and Saturday at the University of Toledo’s excellent indoor training center, with a training session featuring national staff curriculum and Nike Sparq Training sandwiched in between. USSF staff member Keri Sarver was on hand along with about 40 college coaches to watch the proceedings.

Tomorrow we’ll talk about the actual program some more, and Thursday we’ll get some comments from some of the coaches, but here’s what I saw at the actual games.

These teams played each other twice and the lineup was mixed up a bit for the 2nd day. Ohio Premier’s Lindsay Agnew scored the first two goals on a pair of precise strikes. Madisson Lewis added a third for her team on a long-range shot in the 2nd half. Madison Oyer cut the lead to 3-1 with a finish from a very wide angle, but Morgan Profitt restored the 3-goal cushion with a rebound of her own blocked shot. After Leah Haidar fired home after a quick turn to make it 5-2, Alison Krause ran onto a ball over the top, controlled it well and then slotted home for the final 5-2 margin.

On Saturday, Krause picked up where she left off, scoring from the left-hand side. Lewis and Emily Byorth played a terrific 1-2 with Lewis heading home Byorth’s cross to level the match at 1-1. Agnew then made a surging run through the middle before finding Kayleigh Steigerwalt on the left, and the Carmel player’s shot trickled in to make it 2-1.  Michela Paradiso made a good run down the right and crossed for Rachel Marble to finish to bring the goal count to 2-2 Leah Haidar scored a classy goal to put her team back up 3-2, chesting down a ball and then volleying home from all of 35 yards. Agnew then equalized with a free kick from 25 yards to the left of goal, but the scoring wasn’t quite over as Steigerwalt scored on a 1st-time strike from a setup by her club teammate Madison Oyer,who had made a strong run down the left.

Out of breath? I know how you feel as this was just the 1st half. The 2nd half saw a somewhat slower tempo and a bit more possession. The only goal came from Alison Krause as the Michigan State recruit tallied her 3rd score of the weekend for a 4-4 result.

Among the top performers over the two matches, Kaitlin Miller and Morgan Proffitt (2013s committed to Kentucky and Marquette respectively) were strong in midfield. Miami of Ohio recruit Emma Schneider was composed in the back with good distribution (and the 9-a-side format played at the event made it a tough environment for defenders). Ayanna Parker of Ohio Elite showed me a lot in goal. She tracks curving, difficult shots quite well, has strong hands and a definite ability to pull off the gee-whiz save.

On offense, Krause showed a real nose for goal, while Michigan recruit Leah Haidar combines explosiveness and creativity on the ball. Agnew scored three goals on the weekend and never seemed to tire of looking for opportunities to score. The Columbus, Ohio resident will be playing college soccer at Ohio State and is already involved with the Canadian youth international setup as we discussed after the Saturday match.

The scoreline got out of hand in the Friday night match for the youngers, with Team Three taking an 8-2 result. The match was played at breakneck speed for much of its duration, and in all honesty I never saw a lot of good, flowing, combining soccer, although there clearly was a lot of individual talent on display.

Manning has a predator’s attitude in front of goal and really recognizes opportunities,even when she’s hanging around the midfield stripe with the ball in her team’s end, well. We learned from one of her club coaches, Doug Landefeld, who was a great help to us all weekend as the event coordinator, that Manning (they call her Mini) is also a top-notch hockey player. We talked about it with her after her goal-scoring expoits Friday.

The soccer in the 2nd game was better, even though the scoreline only changed by one in a 7-3 result. Goalscorers for the winning team included Taylor Timko (2), Rubina Veerakone (2), McKenzie Muchow, Samantha Edwards and Jamie Cheslik. For the losing side, Manning, Belia Habuda and Courtney Peterson scored.

Besides the obviously-prolific Manning, Courtney Peterson, one of the youngest players here, was perhaps the biggest standout with her composed midfield play. Others who showed well included Samantha Kokoska of Carmel United, Ohio Elite defender Megan Niebuhr and Hawks midfielder Ashton Miller.

Wednesday and Thursday – More of the program of PDP and what college coaches had to say about the event.