Despite his failure to guide the U.S. U23 Men’s National Team to the 2012 London Olympics, head coach Caleb Porter remains very much in the plans of the U.S. Soccer Federation.

That was the clear message from U.S. head coach Jurgen Klinsmann in a Wednesday conference call with reporters.

“The goal is to keep Caleb connected to us,” he said. “We think he has a lot of upside, I think he learned a tremendous amount during the last 12 months as the head coach of the Olympic team.” 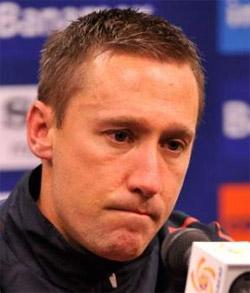 Porter after the U23 loss to El Salvador.

Porter, who returned to his head coaching duties at Akron after the failed qualification process wrapped up on March 26, met with Klinsmann and U.S. Soccer officials on Tuesday in Chicago to discuss why things didn’t work out.

“We worked through that process, discussed the whole meet-up, discussed the games in the qualifying tournament and I think I have a pretty good picture now what happened and why it didn’t work out,” Klinsmann explained.

The discussions covered all aspects of the tournament and the buildup to it, examining everything from player performances, the role of the assistant coaches and medical staff, and specific decisions such as the delayed substitution of injured goalkeeper Bill Hamid in the 3-3 tie against El Salvador.

And while Klinsmann voiced his disappointment, despite the failure of Porter’s team, the head coach stood by U.S. Soccer’s decision to name Porter to the post.

“I think from a working perspective, from a challenge perspective, Caleb was very well prepared for the qualifying process,” he said. “He was extremely organized, he understood the value of all the other teams, the opponents, he did his scouting homework, the sessions that he ran…I think he did a very good job, it was absolutely the right decision to make him Olympic team coach.

“Based on the results and the outcome, now you can argue that maybe a professional coach here [or international coach] would have worked better. I think we know the reasons now why it didn’t work out and it was not because he’s a college coach and not a professional coach, that was definitely not the case.”

The Federation has made no official announcement about Porter, who previously served as a U18 men’s team assistant prior to the U23 stint. But Klinsmann hinted at numerous possibilities for the future to further his development.

“We hope that we find ways now going forward that we find roles for him to improve to grow to mature in his coaching career,” Klinsmann said. “So that could be part of being our camps with the senior team, being part of our workshops we have on a regular basis, all the coaches at all age groups.

“That could be sending him to Europe for learning at European clubs, their models, their way of doing it, watching training sessions there, talk to coaches overseas which I can open many, many doors.”