Profiling the U17 WNT, Five at a Time Albertin Montoya’s U17 Women’s National Team is about to depart for Guatemala where it begins play May 1 at the CONCACAF Championshp, which is the qualifying tournament for the FIFA U17 Women’s World Cup taking place in August.

Like all teams, every player on the roster has a unique story. This week we’re chronicling each of those, as told to us by the players.

Morgan Andrews is a mainstay in this squad, having featured in youth national teams for a number of years. She’s played a number of positions on the field but with Albertin Montoya at the helm the New Hampshire resident has become the heart of the team, playing the holding midfield role with aplomb.

“I actually love it,” she told TopDrawerSoccer.com. “It was a new position for me. Usually for my club I’m an attacking midfielder, and I was used to playing center back for the national team, but Albertin told me at our 2nd camp with him he wanted me there. Once I accepted it and said “Hey. I’m going to make something of this.” I started to really enjoy playing there. I think it suits me because of my long balls.” 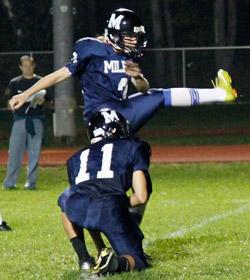 While her long passing does stand out when watching her in a soccer game, she undoubtedly has gained a lot of notoriety for another manner in which she makes a ball travel a long distance. Morgan is the placekicker for her Milford High School football team, and she’s not some kind of publicity stunt or sociological statement either. She earned All-State honors with a 100 percent record in field goals. She got up from being the meat in the sandwich of a roughing incident on one attempt and converted on the next play after the penalty was stepped off.

So she’s tough, talented (at football yes, but especially soccer) and also one of the nicest young people we’ve dealt with over the years. She’ll be at the center of things for the U17s in Guatemala.

With humility and grace, Madeline Bauer has become a stalwart of the U17 Women’s National Team defense.

“She brings the best out of everybody,” Bauer’s longtime club coach Ziad Khoury told TopDrawerSoccer.com. “She is so humble and gives every player respect; she really understands the make up of a team and how to make a great team.”

With an imposing presence and a calm demeanor, Bauer is one of the leaders of the national team from her spot at center back, but that was only a recent development.

“When I started getting called in for the National Team, I always used to play outside back,” Bauer told TopDrawerSoccer.com. “I played a little bit at center back when I was younger and only sometimes at national camps but it was never my natural position.

“In one of our camps in December of 2011, we had an intrasquad scrimmage where my coach put me at center back. The position just seemed to fit me. I've been playing center back every camp since then and love it.”

The position may be new, but the leadership qualities are not.

Maddie's mom, Kathleen, told the tale of how Maddie was already leading her peers from a young age.

"Her kindergarten teacher told me that when a parent failed to show up to lead a group, [the teacher] would just put Maddie in charge."

Maddie is definitely in charge now.

A crafty and versatile player, Sullivan is listed on the roster as a midfielder, but she can line up on a number of spots on the field including as a forward, where she’s played in previous camps.

The D.C. area native recently committed to Stanford, but she’s firmly focused on the upcoming tournament and believes the team is ready to tackle the task at hand.

“I am extremely excited for qualifying,” Sullivan said. “It's finally the real deal. When we were younger, the opportunity of playing for the United States in a World Cup was always mentioned to us but seemed like it was in the distant future. Now the opportunity for us to qualify is here. There's not a doubt in my mind that we are ready.”

Gabrielle Miranda is a starting defender with the team. She made her mark with younger-aged youth national teams and with her club team, Colorado Rush, as a piano-playing midfielder. “Gabbi” has exceptional ball skills and it still seems odd to think of her as a defender, but she said she is happy to help the team however she can.

She was born in California but her family moved to Colorado when she was 12, and is now in her 4th season with Colorado Rush, having been recruited from another Denver-area club by current Rush teammates.

“The Rush made me the player I am today,” she says.

Asked to reveal some personal facts soccer fans wouldn’t know about her, she mentioned that she is half-Filipino (from her father) and also played competitive volleyball, even advancing to the Junior Olympics in that sport (but it’s all soccer now – good choice Gabbi!).

At least when it comes to sports, UCLA verbal commitment Darian Jenkins says she is all about the soccer.

“Outside of soccer, I’m not very good at other sports,” she confided to us recently. ‘I’ve tried basketball, volleyball, tennis…”

To which we say, who cares about those sports anyway. It’s time to qualify for World Cup.

Darian is a speedster (she did admit upon further prodding that she has had some success at track and field) and has been lining up on the left side of the front line in Albertin Montoya’s 4-3-3.

She was discovered through a U.S. Soccer Training Center last year, after which she was invited to her first team training camp along with fellow Utah player Emily Bruder.

Darian loves the outdoors and said another favorite pastime is wakeboarding, which looks like a ton of fun for those who never seem quite able to get up on that thing and ride. So there is another sport she is good at. We think she is just being humble, but we’re glad soccer is her first choice.