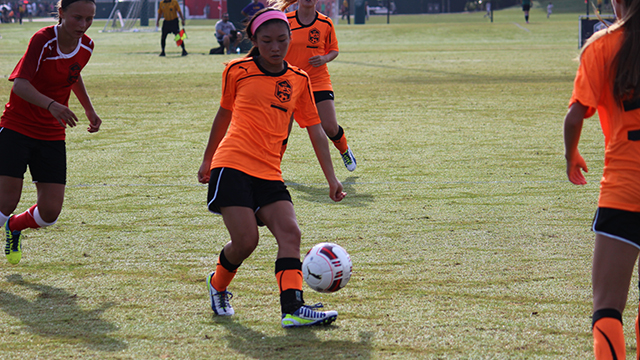 LAKE BUENA VISTA, Fla. — The Puma Women’s Elite Showcase kicked off on Saturday at the ESPN Wide World of Sports Complex, featuring a plethora of young talent from across the nation.

Four teams compiled the weekend of soccer; evoSpeed, evoPower, King and Puma. Here are the recaps from Saturday’s showcase:

A first-half surge from evoPower was all they needed to open up their run at the Puma Elite, defeating evoSpeed 3-0 on Saturday.

Julie Doyle wasted no time getting her side on the scoreboard. The versatile winger broke through the defense, leaving her shot to bounce off a defender only for her to hit a volley behind the goalkeeper in the 12th minute of the match.

The West Coast FC attacker would find the net again in the 32nd minute after her speed once again managed to navigate her past the defense to double the lead. EvoPower secured the game moments later when Makenzir Burton’s shot from close range squeaked past the goalkeeper.

Goals continued to mount at the Puma Women’s Elite Showcase, this time featuring a powerful Team Puma side that routed Team King 4-0.

Team King held possession for the early part of the game, but all it took was the opening goal from Team Puma by Kalli Vogel in the 32nd minute to change the outlook of the match.

Vogel converted on a penalty kick after a foul was whistled inside the box. Haddie Carlson doubled the lead before the halftime whistle when she slotted the ball into the net from close range.

Belle Briede and Emily Hillman capped the rout in the latter part of the match, after executing on their counter attacks.

Despite suffering a defeat earlier in the day, EvoSpeed showed resiliency on Saturday afternoon when they defeated Team King 2-0.

Defender Maya Boles gave the Reds the early lead, using her speed to dominate the flanks and maneuvering her way into the box to strike from close range in the 20th minute. Midfielder Taylor Aylmer’a goal from long-range in the 32nd minute solidified the game for EvoSpeed.

Arguably the best team in the showcase, EvoPower decided to give a déjà vu performance after defeating Team Puma 3-0 on Saturday afternoon.

Forward Julie Doyle’s performance on the wings helped produce all three goals, with the first one coming in the opening minute after Doyle found Audrey Ward to strike from close range.

Amber Hoot doubled the scoreboard in the 24th minute after a pass from Doyle lead the midfielder to advance in the open space to slot the ball behind the goalkeeper. Amber Trip capped the first-half surge and the match in the 32nd minute when she dribbled past a line of defender to place the ball into the net.