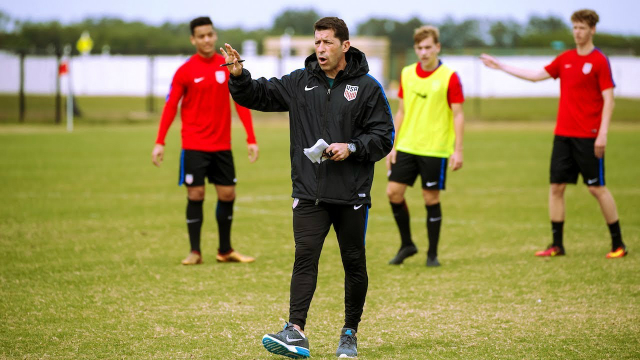 U.S. Under-20 Men’s National Team head coach Tab Ramos has named a 20-player roster to defend the team’s confederation title at the 2018 Concacaf U-20 Championship, which takes place from Nov. 1-21 at IMG Academy in Bradenton, Fla.

As the tournament’s top seed, the U.S. was drawn into Group A and opens the tournament against Puerto Rico (Nov. 1), followed by U.S. Virgin Islands (Nov. 3), Trinidad and Tobago (Nov. 5) and Saint Vincent and the Grenadines (Nov. 7) before finishing up against Suriname (Nov. 9).

“I’m looking forward to this U-20 World Cup Qualifying challenge,” Ramos said. “This new format provides opportunities to many nations and makes the qualifying process much more difficult. Although our preparation will be short, we will be ready to defend our first-ever Concacaf title”

2018 Concacaf U-20 Championship Roster by Position (Club or College; Hometown)

The new Concacaf U-20 Championship format features four groups of six teams and two groups of five teams. Following round-robin group play, the top team in each of the six groups will advance to the qualification stage, where they will be divided into two groups of three. After a second edition of round-robin play, the two group winners plus the second-place finishers will qualify for the 2019 FIFA U-20 World Cup. Additionally, the two group winners will advance to the tournament final to determine the regional champion.

Teams qualifying for the qualification stage of the tournament will be permitted to amend the 20-player roster and replace up to six players within 24 hours following completion of their final group stage match.

The USA returns to the confederation tournament as defending champion after capturing its first title at the U-20 level in March of 2017, defeating Honduras via penalty kicks in the final. The team went on to reach the quarterfinals of the 2017 FIFA U-20 World Cup in Korea Republic, where it lost to eventual tournament runners-up Venezuela 2-1 in extra time.

FC Dallas U-15/16 team that won the 2016 Development Academy Championship. Pomykal was also part of the club’s U17/18 team that also won the championship that year.

The U.S. has qualified for 15 of 21 FIFA World Youth Championships/FIFA U-20 World Cups since the biannual tournament started in 1977, including 10 of the last 11 and three straight under the guidance of Ramos. The team was eliminated in the quarterfinals in each of the last two World Cups, falling on penalties to eventual champion Serbia in 2015 and in extra time to runner-up Venezuela in 2017. The USA’s best U-20 World Cup finish was a fourth-place performance at the 1989 FIFA World Youth Championship in Saudi Arabia.